“Careful. This is the last haven you’ll find here. Beyond, there is no light to protect you. But don’t be afraid. Your heart is the mightiest weapon of all. Remember, you are the one to open the door to the light.”

‘The icing on the cake’ is a phrase that always comes to mind when I play a game that has an ‘epic’ finalé. The best way to top off all the hours spent on menial perfections and alternate story content is to let it all build up so whooping the big antagonist feels like it means even more than what the main story has given you. Strategically, it makes most sense to leave the “last” scene to last, but at some points in the middle or so of your journey, there may be a nasty trick from your favourite developer by giving you that Zelda moment where you slip through a door just for it to seal shut behind you. For me, I typically react to these situations with the standard “I’m not ready” with a follow-up of a quit without saving back to the last time I booted up.

(Obviously, there are exceptions. Not every boss completely locks you out of content.)

I am conditioned, now, to go find out every single optional thing I can do and do them before I’m locked out. It’s jarring, though, to know that I either have to consult a guide just in-case I miss something, which results in ruining the heart of that first run or having to painstakingly find every secret before I’m ready to do main content again. What this leads to is side-content not being completed in nice bunches which count as a break from all the seriousness, but instead completed as they come, which varying from game to game may or may not be the intended way of doing them.

There’s also the tendency for games to provide content after you beat the main story’s last boss, including an optional all-out challenge boss that you have to use all of your game knowledge and extra-curricular training on. You bet these bosses expect you to be capped out in level and have all of the best equipment.

Isn’t it enticing, though? Knowing that all you’ve earned and prepared for is leading up to an ultimatum unseen?

Here’s my rundown of my favourite no-return points (spoilers) and what they mean for the game and why they’re special to me: 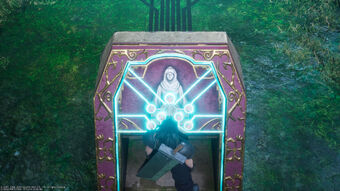 Starting out with a huge nostalgia bias (sue me) – I never actually owned Final Fantasy 7 for the PS1, however I did own a PSP spin-off known as Crisis Core, which takes place before the events of the main game. I played this game a fair bit, so it’s a shame that most of it is lost now to me through memory. It’s… on my backlog for a replay, though, I promise.

What’s important to me about this point of no return is that it accompanies the totality of a previous point of no return for questing – setting out from Midgar to Nibelheim. Even if you wanted to go tie up all loose ends, some missions are only tied to what is currently happening in the story. This way, this point of no return is more painful to go through because you already know that even beyond itself, there’s not much to return to if it somehow turns out that you can return. Seems like that’s part of the Price of Freedom. 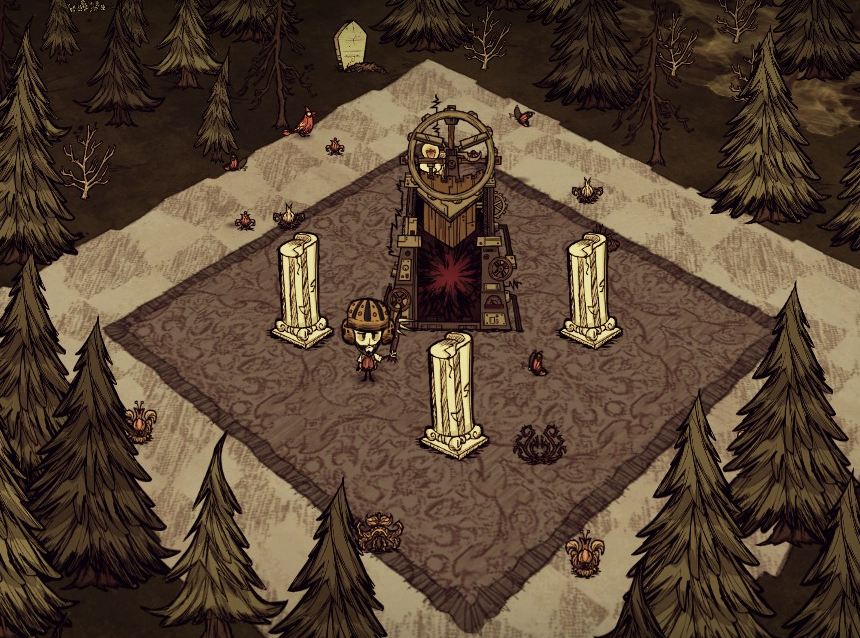 The uniquely dark and ragtime vibe of Don’t Starve hits hard, but a fair bit harder when you finally get Maxwell’s Door open. I initially instigated Adventure Mode on complete and utter happenstance after surviving countless days without starving as the game requested me to. Once you’re in, you’re welcomed by the familiar face of Maxwell who gives you another quip like he did at the start of your survival run and vanishes once more. What ensues is a gauntlet of 5 semi-randomised chapters that you have to complete from scratch. And if you die without a means of revival, you’re back to your survival world to do it again.

The door acts as a way for Klei Entertainment to impose a story and gauntlet challenge on those sitting comfortably in their survival worlds in order to shake things up. What this point of no return does well is that it only softly caps you off, you can always go kick the bucket to return to your survival world, however Adventure Mode is such a good switch-up that once you begin it really does feel like a point of no return. Once you suffer through the wicked twisted variants of the worlds, and end upon the Nightmare Throne, Maxwell in tow, another point of no return you might not understand hits you – swapping yourself out to be on the Nightmare Throne means that survival run you are now the character you swapped out for. In most cases, poor Wilson gets trapped and now you’re an insufferable lanky magician. A good way, again, to have semi-permanent consequences to change up your survival world whilst also tying in plot.

The Wall of Flesh (Terraria)

Jam-packed-voxel-based-RPG-shoot-em-up-battler-style-building-boss fighter Terraria has a brilliant way of surprising you with new changes after the first kill of every new boss. Some of the ways you summon these bosses are an enigma to figure out without any nudge in the right direction, but the pieces are sprinkled there – what you’d never be able to figure out is how much a boss might influence the world. As most player’s process goes, they explore the surface and delve a small amount into a random cave, getting sidetracked until they find a chest with a Suspicious Looking Eye to summon the first boss. They summon it, or if they’ve been slow, it comes to them. When they do defeat it, they’re rewarded with money and ore. So, you expect the bosses to work similarly… right? Well, not so much. If you’re like me, the first time you traverse the Jungle and get into a Hive, you’ll set off Queeny without even realising why. Then, you’ll curse the Old Man and get the textline “My Master can only be summoned at night” or get your backside chomped by a Dungeon Guardian, then understand that there’s some actual gate-keeping behind this cool looking dungeon structure. There’s a few puzzles, but nothing comes close to how the Wall of Flesh redefines the game.

How Terraria tells you its world is changing is part of this point of no return. Smashing your first Shadow Orb or Crimson Heart gains you an ominous message in chat… it’s quite a different way of doing things. A chat feed in a single-player experience isn’t common… it’s very MMORPG-style. There’s no screen-shaking effects, cut-scene or pull from gameplay. Even when a huge alien meteorite hits the surface of your nice world it is simply given a small notification.

When you finally get tired of your guide and sacrifice him to the demons below, you might find that the catastrophic slab of slowly-progressing viscera is a bit too much to stomach, and try to return home using a Magic Mirror… only to realise that you’re not allowed to escape from this fight like you are others. If you’re going to fight the Wall, it’s you or… them(?)

And so… once you do beat the Wall of Flesh, only for you to get the message “The ancient spirits of light and dark have been released” alongside the standard ‘boss has been defeated’ message, you might rope it in with a new quirk. But once Wraiths start pestering you in your home, that’s a spooky wake-up call for every player, working it out by themselves now the game is definitely in ‘Hardmode’.

This point of no return is immensely satisfying, as much as it is challenging. Re-Logic sell you Terraria for a measly £7, so you expect up to the Wall of Flesh to be good enough for content. And the initial release of Terraria had no Wall of Flesh, so it was that acceptable amount of content. But the 1.1 update was absolutely HUGE. This point of no return being added shows that the developers understood that the game had way more it could offer, and that in time it means business. 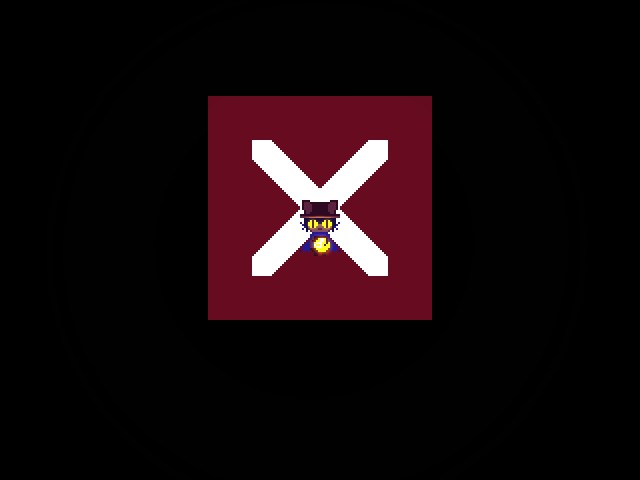 OneShot loves messing with the potential for games to be behind an operating system that can be manipulated. There’s a few other games that do this, but OneShot as a humble RPG-Maker game does it with such a uniquely dreary yet sparkling story accompanying it that it almost feels mystique and detached whilst at the same time directly involving you. The author behind OneShot understands there’s a disconnect between the player and the story yet ropes them in anyways to attempt to involve them and gain sentimentality for once – this is part of the reason the game loves to involve your desktop and file system, too.

Nearing the climax of you and Niko’s journey you finally reach the bottom of The Tower, where you need to replace the Sun in the form of a light bulb to restore light and warmth to the world you and Niko have been cast into. At the base of The Tower, you are met with the symbol of the red ‘X’, signifying you need to close your game to enter The Tower. It’s a fantastic way of knowing that entering this area is no mere task, considering you haven’t been forced to close your game (manually) to progress previously.

“Here’s Monika’s Writing Tip of the Day!  Sometimes you’ll find yourself facing a difficult decision…  When that happens, don’t forget to save your game! You never know when…um…  …Who am I talking to?  Can you hear me?  Tell me you can hear me.  Anything.  Please help me.  …That’s my advice for today!   Thanks for listening~”

At some point during Dan Salvato’s snowballingly popular twist-shocker dating simulator game Doki-Doki Literature Club!, the club rep Monika takes a break from actual game dialogue to remind you to save your game. Once it becomes even ever-so-slightly apparent that Doki-Doki Literature Club! is less about scoring a high-school romance and more about helplessly spectating as each girl slowly reveals their very very insane deep love for you (which comes with a lot of violent mental baggage as an added bonus), Monika does her signature break to remind you to save. Shortly following – the big main ‘scare’ of hanging out with Sayori happens – and your saves go poof.

“The game’s telling me to save… so it must be important!” Unfortunately, you can’t save anyone very well on your first run of Doki-Doki Literature Club!, even if you try your hardest. That point of no return between the standard game and the glitched re-run is important to set the boundary of the cut-off point. You’re well aware the game isn’t what it’s laid out to be by the Steam Page or impression at this point, but the game won’t let you take solace and see if it’s still being quite classic visual novel in the fact that it has very dramatic and over-the-top-with-violence bad ends.

There’s no better feeling sometimes that being slung into the unknown. Whether it be so you can explore, to face something head on, or to be enticed so much that you’re on your toes with absolutely no idea what’s next, locking the door behind someone is a common thing in horror and a common thing when developers want to set up drama.

I just don’t like it when it excludes me from content. New Game+ is always nice, too, but a lot of the time that makes me have to replay a bunch of story stuff to get back to where the optional stuff is to finish it up.

Not the worst gaming travesty, though. So instead of looking back for what could have been, push forward, with gusto.