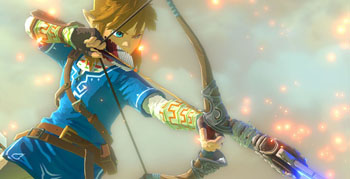 The Wii U game’s “open world” is as big as the system can handle. They’re pulling out the big guns!

“A huge, seamlessly unfolding world is something that can’t be achieved if the hardware isn’t advanced enough,”. “Ever since we made the very first generation of Legend of Zelda games though, we’ve had as large a world as can be realized with the hardware, so you could say it was inevitable that we’ve now done the same with the new Wii U title. This was aired to Gamereactor Magazine by longtime series producer, Eiji Aonuma.

The Legend of Zelda for Wii U, which doesn’t have an official title beyond this as of yet, was unveiled at 2014’s E3. It was referred to by the public as being an open-world game, due to the scale given of what was on show. However, Aonuma takes issue with this description because because “Zelda games have always allowed you to roam and explore a huge world.”, not because that this public description is inaccurate.

“What’s changed now is that the hardware has progressed to the point that you can now explore this vast world seamlessly; the underpinning of the game hasn’t changed,” Aonuma explains, regarding what distinguishes the open world seen in this game from that of previous Zeldas. The new open world is practically seamless!

Alongside Shigeru Miyamoto, Aonuma gave a demonstration of the game back in December 2014. Miyamoto then put the size of the game world in perspective, saying that the whole of Twilight Princess’ map would represent only one area in the new game. As you’d probably have gathered, given that scale, there will be plenty of side quests to do, which is always an added bonus! We’re looking forward to this one!

The game is expected to be out at some point this year, so keep your eyes and ears open!