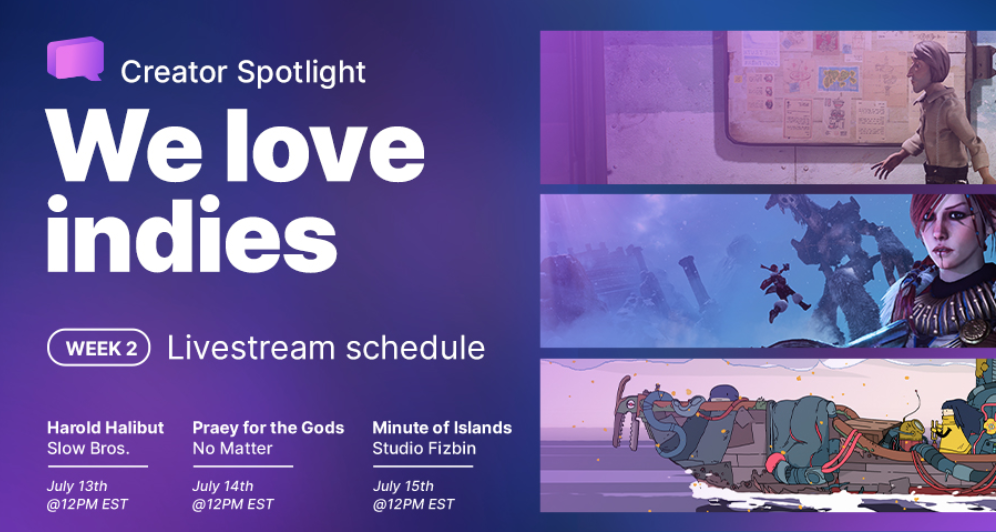 On the 5th of July, Unity started a Creator Spotlight week where they showcase themselves education those on how to create and develop video games, they also invited other indie game developers like Studio Fizbin, No Matter, Lux Games and Slow Bros to showcase their work from the process of starting ideas, to developing and then publishing the final product with the Unity software. This event lasts until the end of the 20th of July streaming on Twitch, but if you miss it you can watch it on Unity’s Youtube channel later.

☀️🍦 We’re kicking off our summer of gaming with the Creator Spotlight series! Each week we'll feature a different set of #madewithunity creators and their games.

🔔 Next week, we’re hanging out with @devolverdigital! Check out this awesome line-up on https://t.co/vFrZcXW0O3 pic.twitter.com/anqDVq2KA6

The first week of Creator Spotlight has Card Shark developed by Nerial, Boomerang X developed by DANG! and Death’s Door developed by Acid Nerve. The second week they had some Indie game companies showcase Minute of Islands developed by Studio Fizbin, Praey for the Gods developed by No Matter and Harold Halibut developed by Slow Bros. What’s interesting is that they go through step by step and talk about the art style and how they incorporated hand-drawn art into a living, breathing game. For 2D games, the process a different type of challenging than 3D games because they are hand-drawn, they need to be put onto a platform where everything is in motion, they have to deal with layers, frame rates and shading through the system in order to bring a still imae to life. Studio Fizbin also went into some detail on how the tedious process of putting a game on Nintendo Switch, there’s days of process in setting it up in a way it can actually be published and playable on the Nintendo Switch.

📺 Tune in to our latest Creator Spotlight with @nomatterstudios the team behind the breathtaking boss climbing open world adventure game, @PraeyForTheGods!

We’re live chatting about all things development and tools!pic.twitter.com/0YlJmAzAWj

What Unity has in Store for you.

Unity have decided to give their viewers software at 50% off  from their Assets store for the time that the 3 weeks go by. Each week a different set of software is on offer, then for the last week they have the final chance offer available for aspiring game developers to purchase. It’s a good opportunity. I say go for it!