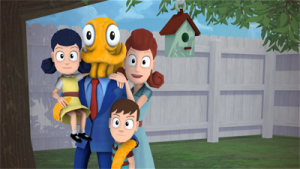 Everyone likes a bit of Octodad.. You have to admit it! The dashing chap is not only a father of two, but a flipping octopus for heaven’s sake!

‘Octodad: Dadliest Catch’ has made almost $5m in revenue after, since it’s release a year ago, shifting 459,753 copies of the game. The developer, Young Horses, has revealed that it’s sole team of nine spent approximately 28,208 hours on the game… Good heavens… But all the hard work has certainly paid off!

Overall, Octodad took two years and seven months to make, and the highest individual hours from a team member clocked in at 5,055. That’s dedication right there..

If you haven’t yet played this marvellous game, or heard of it for that matter, then you can watch 18mins of game-play HERE, on our ‘Exciting Game Trailers’ playlist on YouTube.