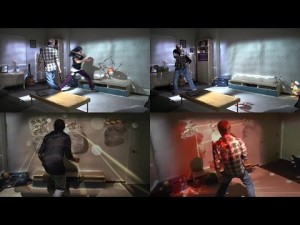 Microsoft kicked off with IllumiRoom almost two years ago in January 2013. So forget your bog standard television screen because this beauty combines the Kinect and projectors to expand your gaming experience to an entire side of a room!

As a research project, this has influenced a brand spanking new tech demo which has been given the name ‘RoomAlive’. This, on the other hand, is even more impressive. It combines projectors and not one, but six Kinects to transform an ENTIRE ROOM into a gaming environment! So, as you can imagine, RoomAlive offers a much higher level of overall interaction than IllumiRoom.

You can watch RoomAlive being tested out HERE