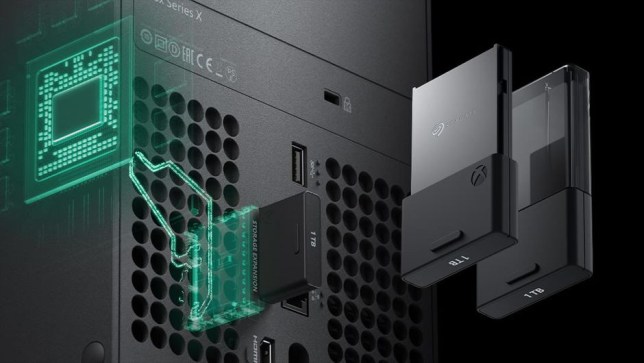 Promotional materials for a 512GB Seagate expansion card have reportedly been spotted.

A more budget-friendly alternative to Seagate’s 1TB storage expansion card is suspected to be announced soon, as promotional materials started arriving at US retailers. We can expect an announcement as early as this week.

The 512GB expansion card is a more affordable alternative for players who want more storage but dont have £200 to fork out for a 1TB card.

Last month, a French news outlet reported on a 500 GB version of the card, claiming a source gave information that it was reportedly being sold to suppliers for €125.71 before tax. Xbox Squad suggests this means the retail price would be between €149-169.

The Seagate expansion card is currently the only way to expand the console’s storage for native Series X/S games. Xbox One and backwards compatible Xbox 360 and Xbox games can still be stored on an external USB drive, but their read/write speeds can’t keep up with Series X/S games.

Xbox director of program management Jason Ronald has explained why the 1TB Seagate expansion card was so expensive.

“The Xbox Velocity Architecture is a key innovation of our next generation consoles, delivering unprecedented speed and performance enabling transformative gaming experiences never before possible on console,” he responded.

“This level of consistent, sustained performance requires advanced components which comes at a higher cost than traditional hard drives or SSDs often found in PCs.

“By partnering with an industry leader in Seagate, we worked together to deliver an expandable storage solution which delivers identical performance at the lowest cost possible and available this holiday.”

previousPS5: Sony Offering Free Trials for its New PS5 Games in the UK