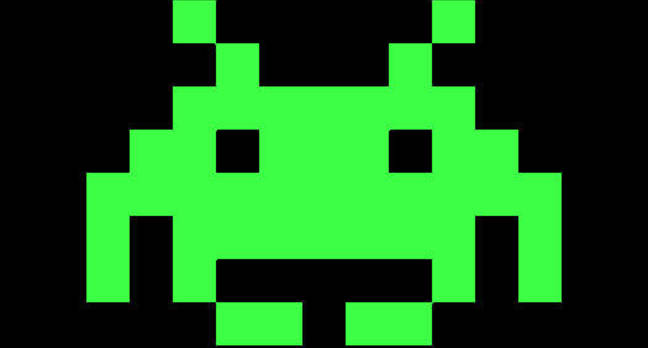 Space Invaders was released in Japan in 1978 and was one of the first shooter games, very different to shooters as we know them today. When it was first released, Space Invaders was a hugely successful arcade game and is still very well-known to this day.

Space Invaders is a very basic game but at the time it was released it was phenomenal. The player controlled a laser cannon that moves horizontally across the screen and fires at the aliens above. The aliens also move back and forth horizontally but slowly advance to you down at the bottom of the screen whilst shooting at you. You had to destroy the aliens as quickly as possible and try not to get hit by any bullets. The original look of Space Invaders

If you have never played Space Invaders I suggest that you try it at some point, it is a great indication at what video games were like almost 40 years ago now. A true classic.

Tomohiro Nishkado was the creator of Space Invaders. Some of the original enemy designs for the game that Nishkado wanted to create were tanks, combat planes and battleships but he opted against all of these options when he took inspiration for a space theme after he saw Star Wars. Space Invaders on an arcade machine

By 1982, 400,000 arcade cabinets had been sold worldwide and made around $3.8 billion in revenue, that was is equivalent to over $13 billion today. The total revenue of Space Invaders makes it the highest-grossing video game of all time. Space Invaders even caused a coin shortage in Japan when it was first launched due to an unbelievable popularity. The little alien image remains one of the most well-known pop culture icons almost 40 years after it first appeared.

There wasn’t just the original arcade game for Space Invaders, there were several sequels to the original phenomenon.

In 38 years, no other game has managed to kick Space Invaders from being the highest-grossing game ever. Space Invaders, the arcade game so successful that it caused coin shortages.