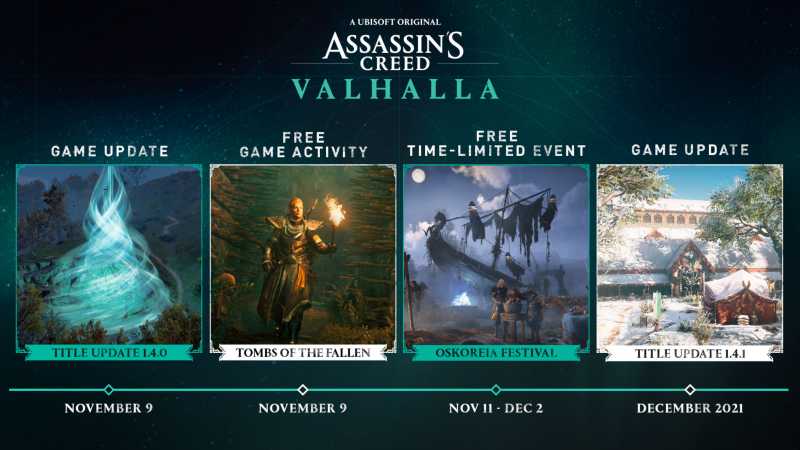 As part of the game’s roadmap for 2021, the publisher announced four pieces of content coming to the game through updates before the year-end.

The first is the 1.4.0 update, which releases the same day as the Tombs of the Fallen DLC on November 9.

The Oskoreia Festival will be a ‘Free Time-Limited Event’ that will run between November 11 and December 2. The final piece of content is the 1.4.1 Game Update, which will release in December.

Ready for more? 🌀 Here's a sneak peek at what's to come in Assassin's Creed Valhalla. Looks like 2021 still has a few more mysteries to uncover. 🔎 #AssassinsCreed pic.twitter.com/B1wdvM5ZQq

Tombs of the Fallen was first unintentionally leaked by PlayStation trophies, discovered by AccessTheAnimus on Twitter. Players must complete one Tomb of the Fallen to earn the ‘Spelunker’ trophy and complete three to achieve the ‘Crypt-ologist’ one.

Ubisoft recently shared that Assassin’s Creed Valhalla has become the “second largest profit generating game” in the company’s history and is set to receive another year of expansions, which is a first for the series. It’s also been verified that a new project codenamed Assassin’s Creed Infinity is in the works – first revealed on Bloomberg.

Ubisoft declared the game’s Siege of Paris expansion, which launched in August, “delivered record engagement”, and that it plans to produce “great new content for year two of Assassin’s Creed Valhalla, notably in the second half of the current fiscal year” ending on March 31, 2022.

Assassin’s Creed Valhalla’s next significant expansion may be titled ‘Dawn of Ragnarök’, according to a recent datamine by j0nathon. If accurate, the expansion will be set in the dwarven realm of Svartalfheim and introduce a range of new abilities and weapons for our hero Eivor.

Get your own copy of Assassin’s Creed Valhalla here!