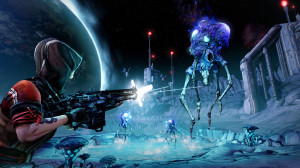 The game has only been out a couple of days in America and already we have ourselves a discovery!

The detection of these loot caves are inspired by the various loot caves exploits found in Activision’s similarly styled RPG-shooter Destiny.

A YouTuber, who goes my the name of “Deathmule”, has discovered a loot cave which can be found on the mission “Let’s Build a Robot Army”.One challenge in particular is to set up turrets to mow down an constant spawning gang of enemies yet, if players dispatch these enemies before the turrets do, they are rewarded with a trove of dropped riches.

Once the mission ends, according to Kotaku, the cave will become inaccessible. This means that the players will have to keep quitting the mission in order to keep the exploit open.

The Second loot cave was found by a YouTuber who goes by the name of “JHFLEETING” , who discovered the cave later on in the game in the mission “Guardian Hunter”. The challenge here is to capture a guardian fire wraith and, if the player is killed instead, the game re-spawns them. Players can boost their experience badass rank through this because of the speed that they re-spawn at.

“Repetition and a lackluster story are its biggest shortcomings, but Borderlands: The Pre-Sequel is different enough to separate itself from the shadows of its older siblings,” wrote the game’s critic Cameron Woolsey.

You can check out these loot cave finds by Deathmule HERE and by JHFLEETING HERE.