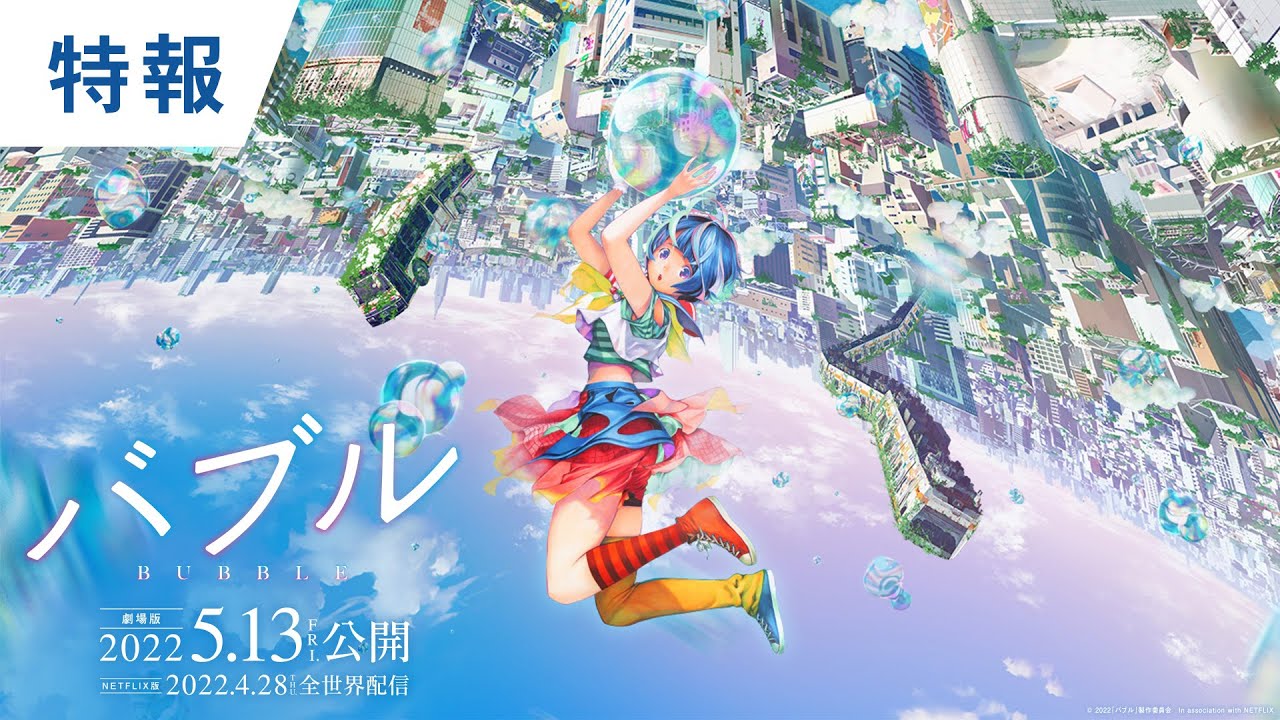 Netflix released a trailer for an original anime movie that is expected to release in Spring 2022 and I honestly could not be more excited.

Bubble is expected to release on April 28, 2022, and has all the makings of an open-world platforming game set in a post-apocalyptic Tokyo where, you’ve guessed it, has gravity-defying bubbles…?

Yet it is also set in a post-apocalyptic Tokyo that has been overtaken by nature and cut off from the rest of the world after abnormal bubbles rained down everywhere and allowed people to defy the laws of gravity. Now, Tokyo has become a playground for young adults that have lost their families for their parkour team battles as they leap from building to building. The movie will follow the protagonist Hibiki a young man who is known for his dangerous parkour style, after he makes a reckless move one day and plummets into the gravity-bending sea, and is then saved by a girl, Uta.  Their encounter leads to a revelation that will change the world.

Post-apocalyptic Tokyo where nature overruns the city certainly isn’t a new concept. Makoto Shinkai’s most recent feature, Weathering With You, also plays with the concept of world-alternating rainfall, and the Netflix series Japan Sinks: 2020 is an adaptation of a novel that puts an ordinary family to the test as a series of massive earthquakes throw Japan into total mayhem. Yet the beautiful animation shown in the trailer for Bubble could easily be the opening sequel for a Japanese open-world platforming game.

The crew behind Bubble are also extraordinary and out-of-this-world talent. Gen Urobuchi, best known for scripting series such as Psycho-Pass, Puella Magi Madoka Magica, and Fate/Zero is the screenwriter while Tetsurô Araki, best known for directing Death Note and Attack on Titan is taking on the reins as the director. Character designs have been provided by Death Note’s own, Takeshi Obata, and music will be composed by Hiroyuki Sawano, who is behind the soundtracks for Attack on Titan and my personal favourite, Promare.

Since it is a Netflix original, it would be the perfect opportunity to create a tie-in game for Netlfix’s newest venture and allow viewers to parkour their way through Tokyo. We can only hope.