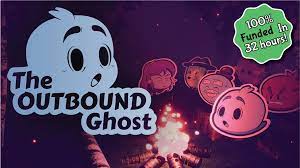 Wow, these past few weeks have certainly been exciting and I am thrilled to see that Congradical Games has received so much love and support for The Outbound Ghost. Exceeding the Kickstarted goal of approximately £7000 in just 32 hours, towards a PC and Nintendo Switch Release, they even exceeded the amount that will get Conradical Games a Playstation and Xbox release as well.

Conrad, from Conradical Games talks us through the devlog. This is the first time we’ve seen The Outbound Ghost ported to the Nintendo Switch console. Conradical Games demonstrates to us how the game functions with frame rate, resolution and loading screens. He also talks us through the in-game dialogue and shows us the vast world of The Outbound Ghost. The video is available to watch down below.

It will be very interesting to see one of these in the future for PC, Xbox and Playstation. Conradical Games have already declared on their Kickstarter page that they have indeed reached the goal for an Xbox and Playstation release as part of their ‘stretch goals’. As they had initially only planned to release on Switch, PC and Mobile.

As a part of their stretch goal update, they’ve Conradical games mentioned..

“We’ve reached over 200% funding meaning that the game is going to be coming out on Xbox and PlayStation! Unfortunately I’m not able to change the tier description due to Kickstarters policies, but if you have pledged for the “Poltergeist Patron” tier or higher ($20 USD), then you can request a key for these new platforms as opposed to Switch/Steam once the time comes!”

There are less than two weeks before the Kickstarter campaign ends. To get your special reward for supporting and backing the game. Check out the Kickstarter to see what’s available.