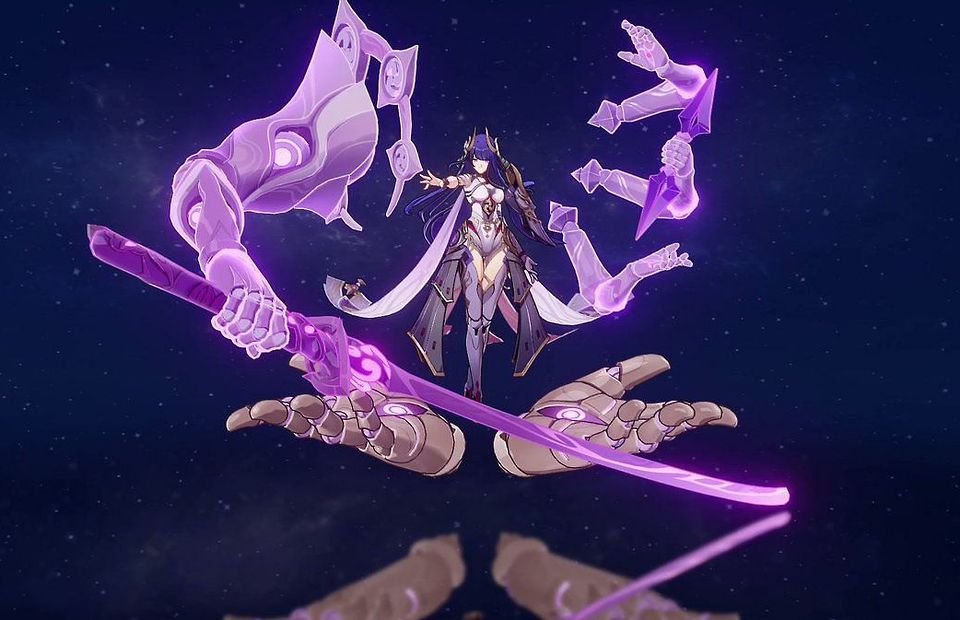 Along with the Genshin 2.5 update comes a new weekly boss: the Raiden Shogun

You will first encounter the new boss as part of the new story quest in Genshin Impact 2.5. This should give you an idea of how the new weekly boss farming should go – though the trounce domain will be significantly more challenging (as usual). From this new weekly boss, you can farm the rare talent materials, such as Yae Miko’s The Meaning of Aeons.

Similar to the fights with Childe and Signora, the Raiden Shogun will go through multiple phases throughout the battle. There are also hidden mechanics that you’ll need to pay attention to:

Ominous Destiny – This is a circular meter next to the Raiden Shogun/Guardian of Destiny’s name. Every attack that hits a character will cause this meter to gradually fill.

Baleful Shadowlord Form – Once the meter is full, she transforms into the multi-limbed golem variant. She will have high damage resistance, and your party will lose energy at intervals, too. To break her shield and get her to return back to her normal form, you’ll need to use attacks that cause elemental reactions with Electro (Pyro, Hydro, and Cryo). However, her shield can slowly get depleted over time while she’s casting her abilities.

While the Raiden Shogun weekly boss in Genshin Impact is in her normal form, her abilities will be as follows:

Combo Hits
Extremely fast attacks that will have you dodging for your life.

Clones
She will summon multiple clones that will do cross slashes. Destroy the right one and you’ll be able to stun her. If you take too long, then she’ll just do another attack. (By the way, you’ll receive an achievement if you manage to kill the correct clone on your first try.)

Implosion
Several dark circles will appear on the ground near the edges of the arena, causing an explosion after a few seconds. A larger circle will then appear in the middle, causing yet another explosion.

Magatsu Electroculi
A dark circle will appear on the ground, and an Electroculi will be on top of it. Destroy this object to prevent the circle from exploding. It’s also possible for the boss to follow this up by causing three more circles to spawn.

Try as you might, but the new boss will likely score some hits on your characters. She will then enter her next battle phase, in which she is invulnerable and will do more damage.

This is when you need to use elemental reactions in order to break her shield. Bit of a bummer for my mono-geo team. You could also simply avoid her attacks until her shield runs down and she returns to her normal phase.

During her Baleful Shadowlord form (such an extra name), she will have the following abilities:

Sword Smash
She’ll raise her arm and a purple outline will appear on the ground. It will slowly expand, following your character’s position, before she crashes down with her sword.

Happy Hands
The floating hands will home in on your location and clamp down on your character. Terrfiying. I’m concerned for those bringing Kazuha to this fight – please give him a nice meal afterwards.

Thunder Totems
Three totems will appear around the Raiden Shogun. These will pulse with Electro energy at intervals, followed by a final pulse with three outlines. You’ll need to time your jumps well to avoid these.

Ripper Claws
Claw-like projectiles will emerge and travel along the ground. Go between them to avoid getting hit. This is followed by a horizontal beam that you cannot jump over normally. Instead, you have to run sideways to avoid it.

Final Calamity
This is her ultimate attack, one that will oneshot even a shielded Zhongli. Basically, she’ll create a small, flower-like object in the middle of the arena. You need to quickly destroy it to create a barrier (use Electro to shatter the object faster). The barrier is the only thing that will protect you from a dimension-ripping slash. Otherwise, it’s instant death. I’m seriously considering building my C6 Barbara.

Once you lower her shield, she’ll be stunned for several seconds. Hopefully, you have your bursts up and can nuke her. If she ends up damaging your characters and powering up her shield once more, then you’ll have to repeat the above process. Good luck!