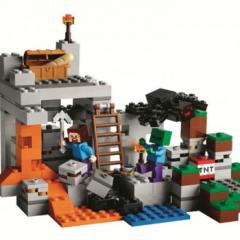 Minecraft Lego
Oh dear.. Images of the up and coming Minecraft-themed Lego sets have been leaked!

Russian Lego retailer, Mir Kibikov, has leaked photos of the upcoming Lego sets which are Minecraft-themed. Shacknews reports that, from the images of the six upcoming sets, they will include The First Night, The Mine, Workbench, Dragon Edge, The Cave, and The End. The Russian retailer claimed that this leak was “accidental”.

The partnership was announced earlier this year by Mojang & LEGO, following the two collaborating on four Minecraft sets which are based on models suggested by fans.

These wonderful sets are scheduled to hit the shelves this holiday season, although no release dates were mentioned with the images.

I have a feeling that everything is going to get a whole lot blockier!

nextWoW: Warlords of Draenor - Subscriptions Advance To Over 600,000 Ahead Of Expansion