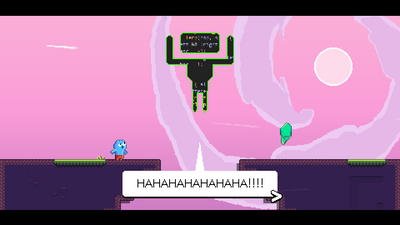 Releasing in August, a Fresh Platformer Puzzle Game That Plays Around With Perspective.

Developed by Dietzribi, Toodee and Topdee is a platforming game, that involves “top-down block pushing to solve puzzles and bring balance back to the universe.” An evil cosmic diety has caused the two dimensions, 2D Platformer world and the Top-Down Puzzler world to become one, which causes nothing but chaos. You must switch between the two perspectives and overcome, puzzles, challenges, crazy bosses to find the ‘missing semicolon’ and save the universe.

Toodee and Topdee has been in development since 2020 and is the first 2-people indie game to be released on Steam. The name Toodee and Topdee is a play on words, referencing the character’s abilities, the gameplay and plot. The game switches between 2D and 2.5D perspectives, which automatically gives gameplay an interesting ‘angle’.  They also have a great variety of quirky characters and memorable dialogue. It may look simple, but the game is jam-packed with element that make the experience the complete opposite.

If you’re curious of gameplay, here’s 10 minutes of it. This will give a good example of what to expect.

This game allows multiplayer mode, which makes the experience all the more fun to play with a friend. Considering the fact that the game is about two protagonists working together, the local co-op will make the gameplay experience a little more immersive and will really give players that feeling of accomplishment that comes from team work.