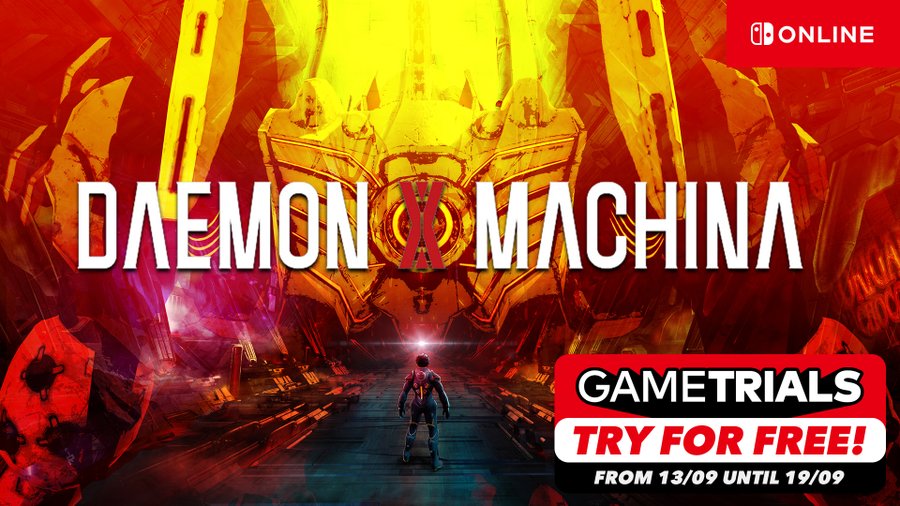 Daemon X Machina on Nintendo Switch, Is it Worth It? An Honest Review

This is a review of Daemon x Machina after Nintendo offered a free 7-day trial download from the shop, which means individuals have full access to the game for a limited time and only to those who have Nintendo Online Membership. This means any progress I make in Daemon X Machina will be transferred to the full game,  but before we get into the review and for those of you who didn’t come from the previous blog…(if you came from the previous blog, please scroll down to get straight to the review).

What is Daemon X Machina?

Daemon x Machina is a third-person shooter, developed by Marvelous Inc and First Studio. Mankind is at war with machines. The world is filled with fast-paced gameplay and beautiful chaos with a variety of weapons to equip. The plot described by Nintendo: “When the moon fell, mankind harnessed advanced AI to rebuild the world. However, the same disaster saw the arrival of the Immortals, an evil machine race who turned that AI against its masters. Hope for the future became a bitter battle for survival.”

As an effect of the unfortunate turn of events “An endless war rages between powerful consortiums and the Immortals in a fight to save humanity.” You get to start a journey and join a group of badass mercenaries and look for the secret of the immortals to save humanity before all perish.

Dive into heavy metal mayhem in the #DaemonXMachina Game Trial – now on! https://t.co/EPZq8DvfSK

Let’s start with disadvantages first, it’s always good to get those out of the way and this is an honest review after all. Here we’ll be touching on first impressions, graphics and frame rate.

My first impressions intitially weren’t good. That may be fue to the fact I’m not usually into games like this, I prefer an RPG of some kind, with a lot of cutscenes and grand story to follow through a protagonist. Daemon X Machina doesn’t have that, it has somewhat a general story around their gameplay, which is fine, it’s just not what I’m used to.

I’m not usually picky about graphics, I don’t if they don’t look next-gen or whether they seem top-notch, I’m usually more interested in the gameplay. However, with Daemon X Machina, the graphics happen to look a little grainy on the Nintendo Switch Lite, think fortnite but with a grainy filter. That’s the best way to explain it. It isn’t enough to ruin my experience, it was just something I noticed and left me feeling a little unsatisfied, as I expected the graphics to look a little better than that.

I don’t know too much about frame rates, I’m going to be honest, but what I do know is that this felt a little slow in comparison to what I’m used to when playing other Nintendo Switch games, especially during combat. This feels like it is above 30 fps but definitely not at 60, somewhere in the middle, perhaps a 40 in handheld mode. I can’t speak for a docked version as I only have a Nintendo Switch Lite. It took me a moment to figure out how to run, but once I did, I found myself constantly having to press the R button to run or speed up, because it all felt a little slow. I hope that in the future of any updates, they can increase the frame rate and give me less of a reason to constantly smash that button and speed things up.

Onto the disadvantages, I can confidently say that I enjoyed playing despite the frame rate issues and graphics, I gave Daemon X Machina a chance. Here I will talk about gameplay, controls, soundtrack and camera angles.

The gameplay was certainly fun and I can confidently say, despite the fact it’s slightly violent and involves weaponry, is quite the relaxing game. I enjoy shooting and running around completing missions without having a specific objective from the protagonist in mind. Not to mention, the missions are not frustrating to get through, the controls are very simple and

The controls are easy to use and I have no problem with camera angles. The controls are very simple and despite frame rates, make the gameplay very smooth, I can attack, speed up and move around without any problems. Aiming can be a little difficult at times, I do wish there was a way to click a button that moves you from target to target, but that’s another blog. I can always see with the camera angles and I can control what I am able to see.

Lastly, the soundtracks are on point, there’s not a single dull moment when it comes to the music. It suits very well with the action scenes, similar to the type of music you’d find in a movie, dramatic, fitting and overall done very well. From the moment I opened the game, the soundtrack is what made me want to continue, I can tell they’ve put a lot of work into making the music for Daemon X Machina.

Overall, I would recommend this to anyone who enjoy shooters but doesn’t want much of a story and can wants something to do in their free time but not think about too much. I can mindlessly blast my enemies without a care in the world, while still feeling like I’ve accomplished something once I’ve completed the mission.

If you enjoyed this why not try Daemon X Machina? Keep up with all the latest gaming news, competitions, future discounts, special offers (CLICK HERE)and amazing content.

previousNickelodeon All-Star Brawl: Third Avatar Character Leaked to be in the Roster