A poster of the possible box art for the new game has appeared online. It doesn’t look like the most professional box art in the world and many people believe that it is fake. But the box art for the game isn’t the main attraction about this photo. Above the box art it has a banner which says that the game also includes Call of Duty Modern Warfare Remastered. This is huge, one of the most popular Call of Duty games could be returning as a remastered game. 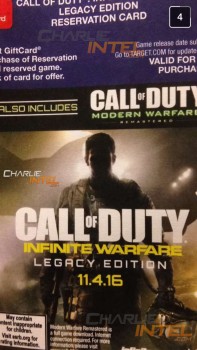 The box art does look very sloppy however so many people have doubted whether Modern Warfare will return as a remastered game. Although it would be an incredibly popular addition to bring to the next Call of Duty game.

If the box art wasn’t enough to make you believe then we have more. Yesterday, Infinity Ward tweeted ‘Stay Frosty’ which is probably the studios most famous catchphrase. Infinity Ward are the studio that brought us Modern Warfare and after the huge popularity of it you can see why they would remaster the game.

If even that wasn’t enough then check out this tweet that the official Call of Duty account replied to yesterday. They are just adding fuel to the fire with the huge rumours that Call of Duty: Modern Warfare will be returning and introduced onto next-gen consoles.

previousHave PlayStation just leaked the title of the next Call of Duty?