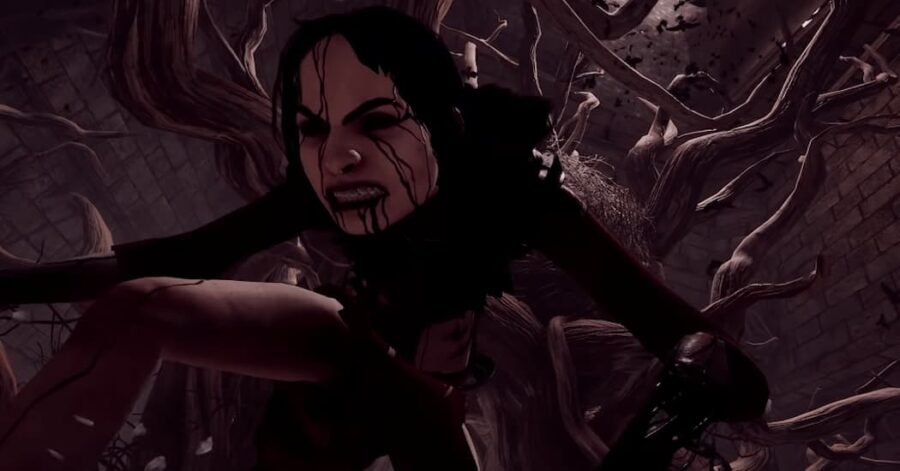 Dead by Daylight by Behaviour Interactive is one of the most prolific survival horror games out there and a favourite among streamers and content creators. There have been many famous collaborations between the game and high-profile horror properties such as Hellraiser, Stranger Things, Resident Evil, and Nightmare on Elm Street. But it also has its own original characters, such as Mikaela Reid. She’s the teenage witch who was introduced back in September. Not only do we get original survivor characters, but killers too.

The Portrait of a Murder DLC is the next chapter in the ongoing episodic series of Dead by Daylight. This chapter will introduce another original homicidal maniac called The Artist, who in life was a ‘gifted but tormented’ painter named Carmina Mora.

She was saved from suicide by ‘an eerie murder of crows,’ which transformed her artistically and brought her great fame. One day, she was abducted by corrupt local officials who cut her hands off and her tongue out, angered by her campaign against them. Now, she’s been twisted by The Entity into a weapon of vengeance, and her only purpose is to kill for her flock.

(The Entity, by the way, is the cosmic embodiment of evil that corrupts victims, destroys worlds, and generally serves as the impetus for all the insane mass-murdering going on in the game. Makes perfect sense, yeah?)

The expansion will also introduce a new survivor named Jonah Vasquez. Jonah is a CIA codebreaker whose visions lead him to a lost cemetery in Chile, The Forsaken Boneyard. Unfortunately for him, this place was the scene of Carmine Mora’s death and is now home to those vengeful crows. The Boneyard will also serve as a new Dead for Daylight map, featuring a tower crypt where crows perch and watch, ‘beady eyes gazing with fascination, never forgetting the day they fed greedily on the flesh of screaming men and women.’ Lovely!

Portrait of a Murder is due to arrive this month. It will cost $6.99 on the Microsoft Store, Steam and Stadia, and $7.99 on consoles (PlayStation, Xbox and Switch). I haven’t been able to find the exact prices in GBP, but you can expect it to be around £6 as well.

previousUnderwhelming sale on PS4 games in the PS Store