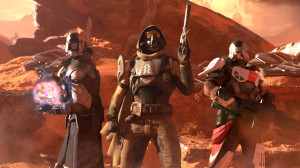 No longer a secret…
Destiny players find ANOTHER DLC area in the game!

It was only last week when we found out that a Destiny player had stumbled upon a way to enter The Terminus (an unfinished part of the game which is set to be released next year) and now we have another!

A second clever gamer has discovered another unfinished area that we are not supposed to see until Destiny’s first piece of DLC, The Dark Below. YouTuber, Se7ensins, uploaded a video which shows how one can find their way into a secret area that should contain a strike mission called The Hypogeum. Everything could, in theory, change however. Due to a bug, The Hypogeum is one of the recently leaked pieces, but Bungie have made clear that neither of the expansions the bug announced are finished.

Don’t get too excited though as, most importantly, there is nothing really to do in this area. All you’d be doing is wondering about in a pretty baron environment and, unlike the last unfinished DLC, there are no ghosts for you to pick up here!

If you’re a Destiny player and are still intrigued by this new found area, then you can check out the video that Se7ensins posted on how to get in, HERE.

previous'World of Warcraft: Warlords of Draenor' Pre-Launch Party in Sydney