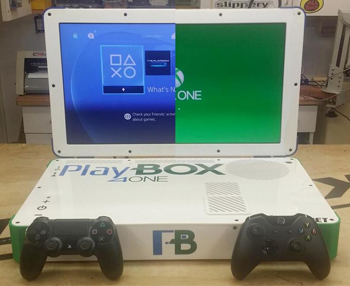 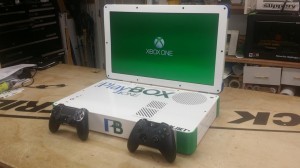 First we had the PlayBook last year, and now the master modder Eddie Zarick has created the marvellous PlayBox! This is a 22″ laptop mod that combines both the PS4 & Xbox One console rivals.

Zarick has said that he built the model specifically for a customer and does not plan to build any more unless they are requested, due to the “high cost and complexity of the process”. Zarick has also stated that this particular piece has cost more than any of his previous creations.

As for the console mod itself, you can see in the image above, the PS4 sits on the left-hand side of the unit, while the Xbox One is on the right. The entire unit requires only one power cord, though just a single system (PS4 or Xbox One) can be powered on at once so that the unit viagra for womens where to buy doesn’t overheat. Very well thought through!

To go between PS4 and Xbox One, all that one needs to do is flip a switch on the back of the unit. As well as this, the unit comes with a smart HDMI switcher that can automatically detect which unit is powered. The USB ports on the side of the Xbox One, however, are inaccessible, though all other input sources are free and available. This is due to Zarick having to make a few compromises.

A note that Zarick adds is that the PS4 turns on perfectly well when using the DualShock 4 controller and that the only issue he had with the mod was the PS4 power button, which doesn’t work consistently due to interference with the Xbox One.

You can check out the PlayBox in action HERE, on our ‘Exciting Game Trailers’ playlist on YouTube!

nextEverything Is Not Awesome - LEGO Movie Snubbed in Oscar Nominations