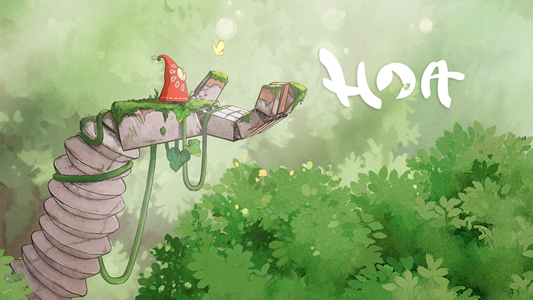 This beautiful puzzle-platforming game ‘Hoa’ was developed by Skrollcat Studio, hand-drawn and painted art, ethereal soundtracks and a cosy, zen-like experience. This game has been described by Skrollcat themselves as “breathtaking hand-painted art, lovely music, and a peaceful, relaxing atmosphere. Experience the magic of nature and imagination as you play the main character, Hoa, on her journey through breathtaking environments back to where it all began.” The world feels alive, despite it being one different from what we know to be reality. It’s familiarity in an unfamiliar form.

Skrollcat Studio has also said it’s “Captivatingly story-telling and emotionally-charged, Hoa’s exceptional score, originally composed and live-recorded, brings its world to life with a touch of nostalgia.” and that gameplay will involve you to “Navigate with a keen eye and solve exploration-based puzzles. Relax to the organic rhythm of subtle storytelling while being intrigued by endless little wonders. Be a child – it’s easier and harder than it may seem.”

Is it just me or does this gameplay have a little bit of a Studio Ghibli feel to it? The music, the environment and the creatures remind me a lot of what I would see in Princess Mononoke, My neighbour Totoro or Spirited Away, some have even compared it Legend of Zelda. The developer’s narrated Gameplay adds some perspective to this as you’ll get to see what you’re jumping into. I 100% believe they’ve backed up my point from just this. The dialogue and quirky characters also add to the experience.

Composed by the Solo Pianist Johannes Johansson, orchestrated by Lauri Koivisto, Sound engineering by Simon Paldanius, mastering by Joe Vegna and Woodwind instruments by Josh Plotner, Skrollcat has created an album for us to enjoy, knowing very well many of us will seek it out. (Normalise releasing soundtracks on launch). Without further ado…here’s the list.

What Platform can You find ‘Hoa’ On?

You can find ‘Hoa’ available on PC, PS5, PS4, Xbox Series X/S & Xbox One, but be warned…it has been reported that the Xbox One version has received a number of issues on launching the game, Skrollcat Studio has mentioned they are working on it as quick as possible. Otherwise, enjoy ‘Hoa’ on any other console you have lying around.

Here’s another look at the trailer.

Love Platformers like these? You may enjoy Greak: Memories of Azur.

previousNeko Atsume: The VR Edition is Finally Released in the West