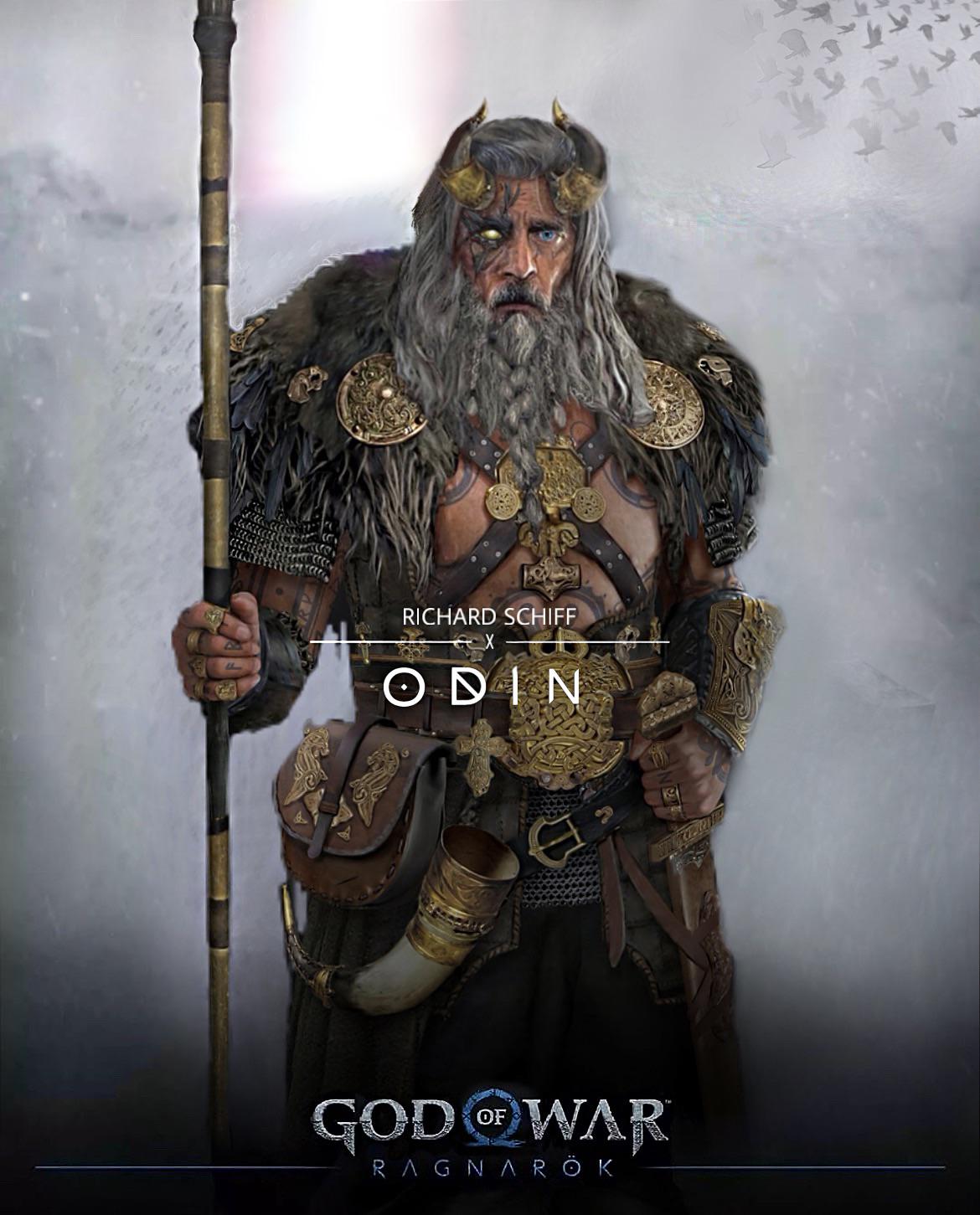 There are a number of recent and upcoming games, films and tv shows that use various cultures and mythologies to drive their stories. This series aims to explore the relationship between an IP and its surrounding mythology. Today, we look at the upcoming God of War game, exploring the character of Odin and how the use of mythology in the God of War series might shape his character design.

Warning: This article contains spoilers for God of War.

God of War Ragnarok is set to be released in 2022. Since the trailer was released last September, we’ve seen images of both Thor and Tyr, key characters in both the Norse and God of War universes. But one character we haven’t seen yet, one whose effects permeates the entire world, is Odin.

Odin in Norse Mythology is the leader of the Aesir. Known as the ‘Allfather’, Odin was the god of wisdom, death, war, magic and prophecy, poetry and healing. He is often depicted as an old man.

Odin’s search for wisdom is famous. Stories of how Odin ripped out his own eye, stabbed himself with his own spear and hanged himself from the World Tree, Yggdrasil, in order to gain knowledge of runes are well-known. Accompanied by his ravens, Huginn and Muninn, and armed with the gift of prophecy, the one-eyed god oversaw all of Midgard and Asgard.

We can expect, therefore, to see a one-eyed Odin in God of War. In the game, Mimir says how Odin tried to gouge out his own eyes after drinking from a drugged well, but that Mimir “managed to stop him before he finished the job.”

Odin will probably be accompanied by his two ravens, Huginn and Muninn in God of War Ragnarok. The two all-seeing ravens have already made an appearance in the trailer – probably acting as spies for the Allfather.

Finally, we may see some signs of his hanging. Having hanged from the tree for nine days, it seems likely Odin would have felt the effects of the rope, even if he could heal himself.

Character traits in God of War 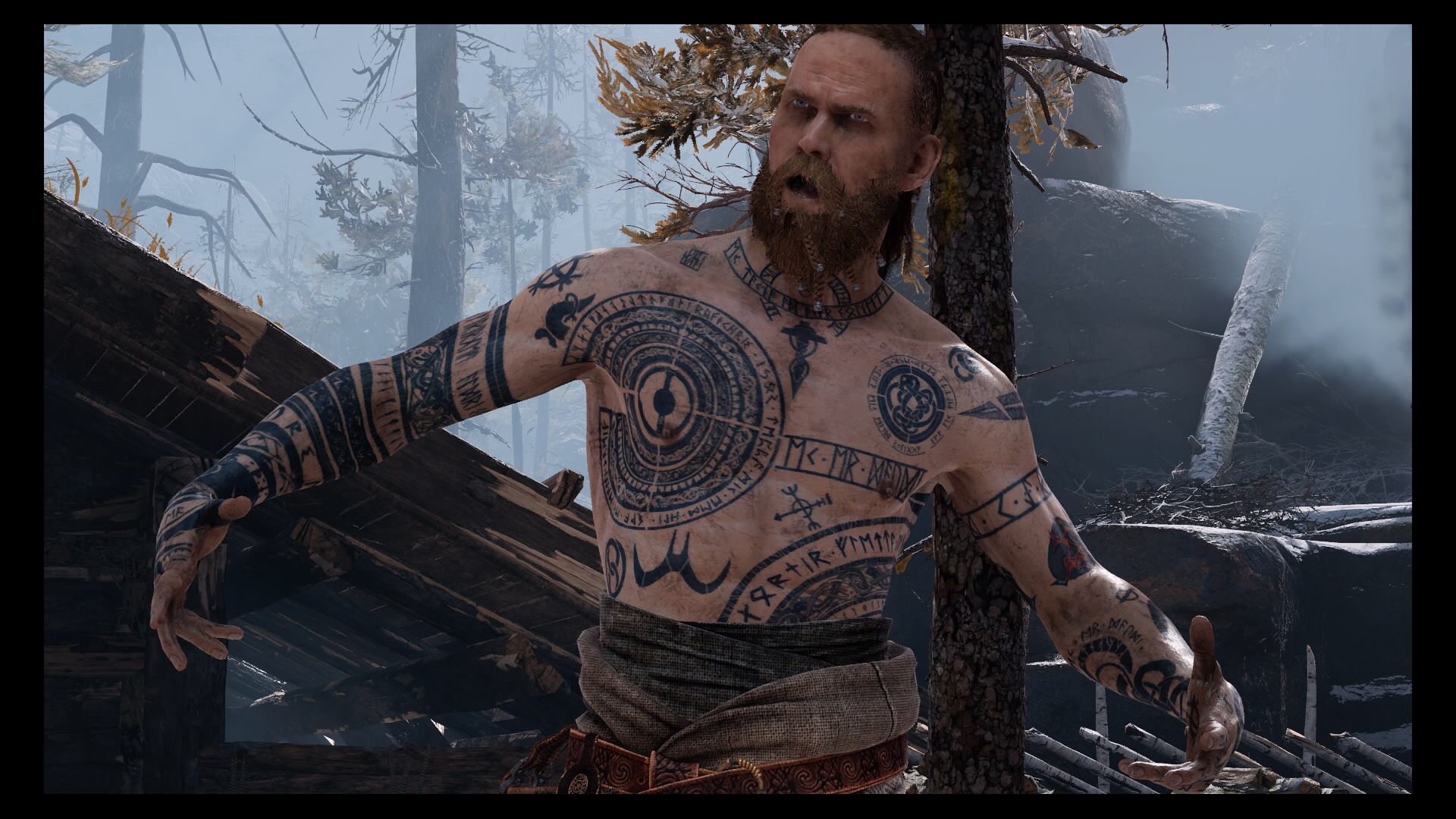 Tattoos have a clear importance in the God of War franchise. Kratos’ red tattoos are a memorial to his brother, Deimos, and remind him of who he has lost. Baldur, covered in tattoos, is constantly reminded about his curse by those runic tattoos. The tattoos glowed an icy-blue when he attacked Kratos. In the promotional image of Tyr, we see he has a hieroglyphic tattoo on his arm, hinting towards his travels to Egypt that we heard about in the 2018 game. In Thor’s concept as well, we see Norse runes adorning his chest. Clearly, then, these tattoos tell a story about who each character is and the Norse Runes seem to have some magical abilities.

As one who hanged himself to learn of the Runes’ power and meaning, Odin will probably be adorned with several. These may just be used to tell his stories or they may have some magical abilities in the game or in combat. In fact, with his knowledge of the runes, what other weapon does Odin need?

Or perhaps Odin will adorn himself in the Nordic knotwork art-style that peppers the God of War design. Having hanged himself to learn of the Runes, perhaps Odin will boast of his victory over death by adorning himself with images of the ropes that bound him to the World Tree. 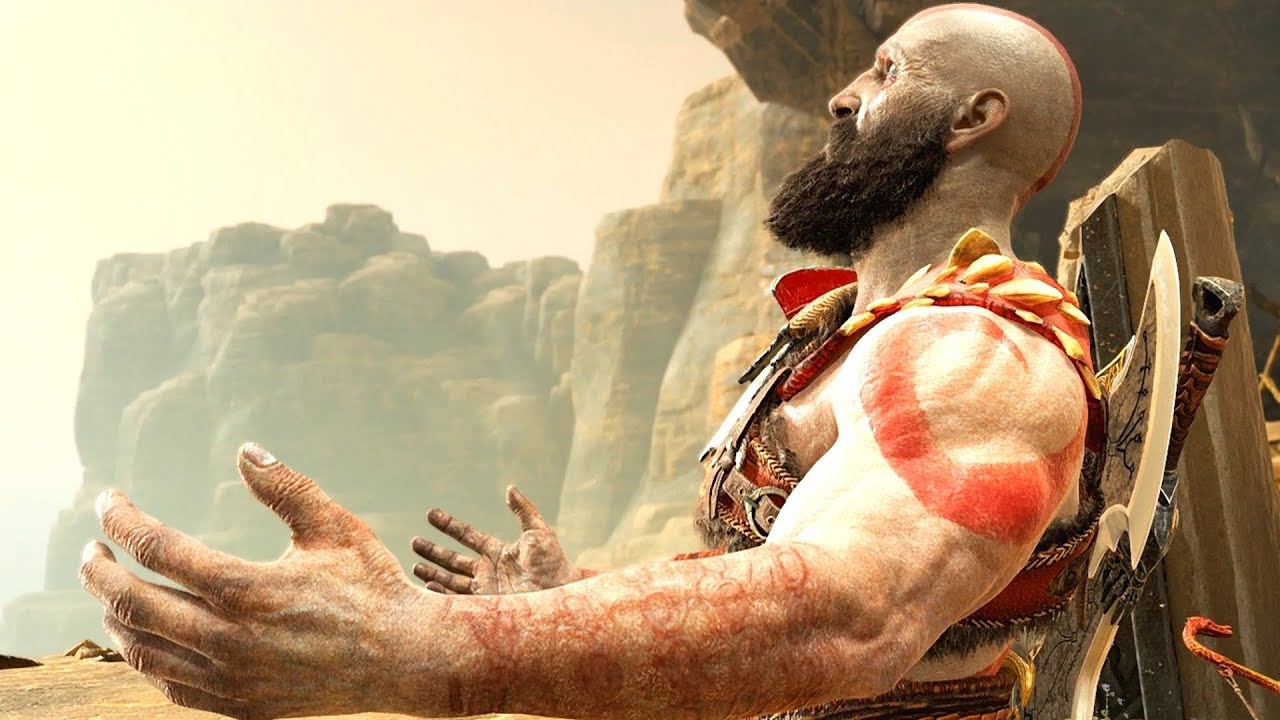 Scars also have an importance in God of War. The most prominent scar is Kratos’ abdominal wound from when he was stabbed by Zeus. Although Kratos can heal himself, he retained the scar – suggesting it be a constant reminder of his past. In addition, at the end of God of War, Kratos uncovers the seared scars of the Blades of Chaos, stating “I have nothing more to hide.” The scars are a reminder of who he was and we see Kratos accepting this past – with the promise to be better.

With Odin, we may see the scar from his spear or from where he ripped out his eye. But we may also see the scars of when he hanged himself – which leads us to the final point.

Kratos and Odin: A Parallel

During 2018’s God of War, we learn constantly of Odin’s tyranny and poor parenthood. He is a terrible husband and a terrible father. Kratos, meanwhile, is learning how to be a father and trying to learn from his own mistakes to teach Atreus to be better. Through the examples of the Allfather, Kratos learns what to avoid.

We also see the parallels between Odin and Kratos through their relationship with fate. Kratos claims “fate is another lie told by the gods. Nothing is written that cannot be unwritten.” Mimir replies, “on that, brother, you and the Allfather may just agree.” Both Kratos and Odin are trying to change their fate. Kratos is trying to stop the curse of son killing father and Odin is trying to stop Ragnarok. Both gods need to believe that fate can be changed.

It may be, then, that we see these parallels reflected in the character design of Kratos and Odin – with both characters fully embracing their past.

However, with no news of when the game will be released this year, we will just have to wait and see.

previousAmong Us VR, and more coming to Meta Quest 2