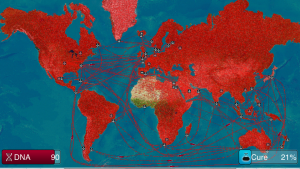 Players raise $76,000 for the Ebola outbreak in West Africa

What a genius way to help raise money for the Ebola cause and via a very apt game! The players of ‘Plague Inc.’ have managed to raise $76,000 to go towards organisations fighting the Ebola outbreak in West Africa.

Ndemic Creations, the developers of Plague Inc., announced a campaign to raise money for organizations like the Red Cross, Disaster Emergency Committee and MSF. This was announced back in November last year. James Vaughan, the owner of Ndemic, announced the results of this push to help. He said that over 800,000 players have visited PlagueInc.com/StopEbola.

“The current Ebola outbreak is highly concerning and I wanted to do something to help,” James Vaughan told Polygon. “Obviously due to the nature of the game, Plague Inc. highlights the risks of infectious disease and helps players understand the importance of taking action. By showing a message in game, it can reach people who might not normally think about donating to a charity in this situation.”

Vaughan added further – “I’m extremely proud of the Plague Inc. community, together we have raised a significant amount of money for charities across the world and provided an example of how groups of gamers can come together and be a force for good.”

Plague Inc. is available for mobile devices and PC.

nextSons of Anarchy - The Long Awaited Game is Finally Available!