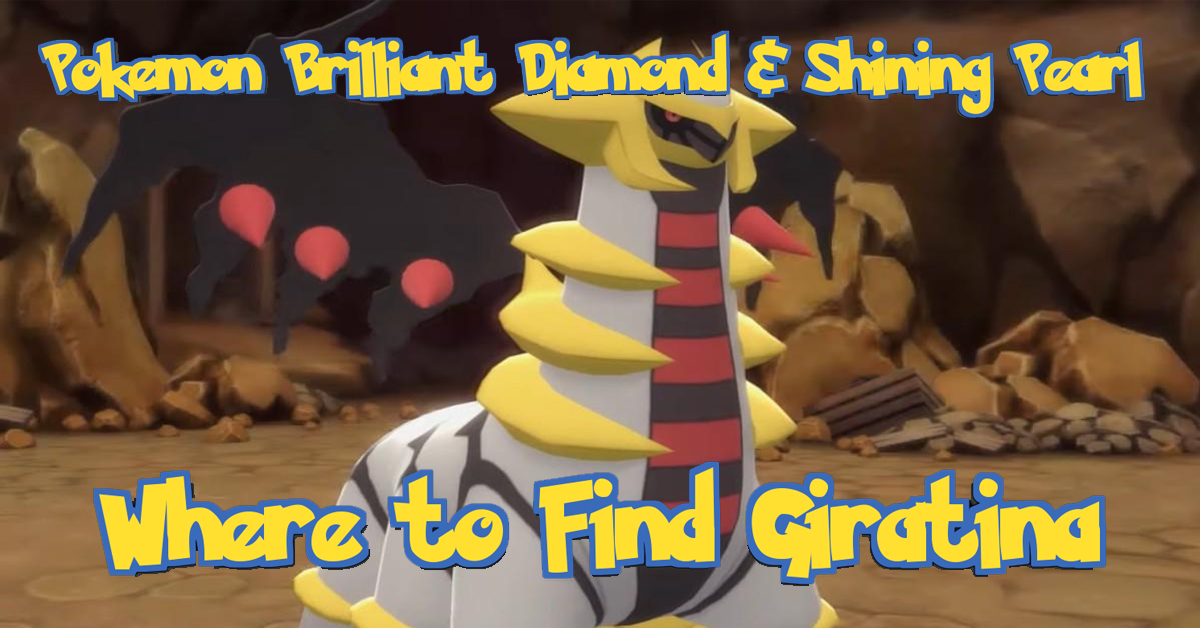 Despite the fact that only a small portion of the Platinum exclusive material made it into Pokémon Brilliant Diamond & Shining Pearl, the game’s mascot, Giratina, makes an appearance. Giratina, along with Dialga and Palkia, is a member of the original Creation Trio, and like its counterparts, has very high stats. This, combined with the fact that it can switch between two different forms, makes it a very powerful Legendary Pokémon.

In the original games, you would be limited to Giratinas Altered Forme. This is not the case in the remakes, as you can get the Griseous Orb to change forms after going through a number of steps. Here’s where to find Giratina, and how to get the Griseous Orb in Pokémon BDSP.

First of all, you need to defeat the Sinnoh Champion and unlock the National Dex by having seen all 151 Pokémon native to the  Sinnoh region. After this, speak to Professor Rowan and he’ll give you the National Dex.

In order to prepare for catching Giratina, I recommend bringing some Max Repels and Dusk Balls. The Max Repels will prevent wild encounters with some of the Pokémon on the way, which can be around level 50+. As Giratina is in a cave, the Dusk Balls will have an increased capture rate. You can buy these in Pastoria City.

Another useful thing to have is a Pokémon with Taunt. This will prevent Giratina from using Pain Split, which can be quite annoying when trying to catch it. This is because Giratina can use Pain Split to heal itself if you have more HP. As always, a Pokémon that can inflict Sleep or Paralysis is handy too.

Where to Find Giratina in Pokémon BDSP

After you’ve got the National Dex, and made your necessary preparations, follow these steps:

Once you’re inside the cave, clear it with Defog so you can see. From here, there is a slight luck-based puzzle you must complete. It’s not really a puzzle so much as it is more of a random chance for it to appear in the cave.  You will be greeted by some cryptic text inscribed on the pillar that reads: “… Past three pillars… to the sleeping… before 30 is surpassed…”

Essentially, what this means is you must find 3 pillars located within the cave, before entering 30 rooms in the cave. The rooms in the cave are randomized however, so there’s no order to this. It’s completely based on luck if a pillar will appear. You may have to retry a couple times if you are unlucky.

There’s no specific order to go through the doors. Just keep going wherever you like and interacting with the pillars as they appear. When you interact with the pillars, they will tell you how many you’ve found and how many rooms you’ve entered.

Eventually you will come across Giratina. Save before interacting if you want to soft reset and be prepared to battle and catch this mighty beast. This will be no easy feat however, as Giratina is level 70 just like the other post-game Legendaries. It has two moves in particular that can make catching it tricky – Pain Split and Shadow Force. The latter makes it so that you can’t use a PokéBall for one turn, as Giratina will be invisible. The former makes it difficult to keep it’s HP low. Putting it to sleep is definitely recommended, as it will make life much easier.

Using the Dusk Balls you bought from Pastoria City will provide a significantly higher catch rate, as you are inside a cave.

Where is the Griseous Orb in Pokémon BDSP

To unlock the Griseous Orb, you must battle and catch all 13 Legendary Pokémon that are available within Ramanas Park. To do so, you must purchase their corresponding Slates using Mystery Shards. Overall there will be 13 Legendaries to catch, so 13 Slates to buy. That’s a lot of Mystery Shards.

After you’ve caught Mewtwo, the Slate Exchange will hold Distortion Slates. You can use this to spawn Giratina in its Distortion Forme. Head to the East side of Ramanas Park and use the Enigmatic Pedestal to summon a level 100 Giratina.

Now you can’t actually catch this Giratina. But once you have defeated it, it will drop a Griseous Orb. You can give this Griseous Orb to your Giratina to hold, and it will change forms. If you take the Orb away it will revert back to it’s Altered Forme. Now you’re one step closer to completing the Pokédex, with a powerhouse to boot.

Pokémon Brilliant Diamond and Shining Pearl is available on Nintendo Switch now. Purchase it from our store!

previousCall of Duty: Vanguard Numa Numa Map cause players to split due to visibility issues