It may be old news by now, but seeing the Jimquisition’s take on it today really riled me up on the topic again, so here’s my extremely Turkey-cold take on the whole debacle, while also hoping to give more insight to others less familiar.

Earlier this year, it was leaked that Scott Cawthon (creator of the beloved Five Nights at Freddy’s or FNAF franchise including games, books and more) donated around $42,000 (around £31,460) to various far-right politicians and anti-LGBT+ advocates since 2016. People donated to include Mitch McConnell (anti-abortioneer and homophobe), Donald Trump (need I say more?) and Ben Carson whom amongst other things, has also shared the antisemitic dog whistle that Hitler’s power would have been “diminished if the people had been armed”. The donations were later confirmed by Scott Cawthon and OpenSecrets.Org, a non-profit that tracks political donations in America.

Shortly after the news and his confirmations, Scott allegedly received death threats and by his admission, was even doxxed (when an internet troll/s leaks personal information with the intent to harm, such as a person’s address or phone number). Not long after, Scott released a statement declaring his retirement pictured below. 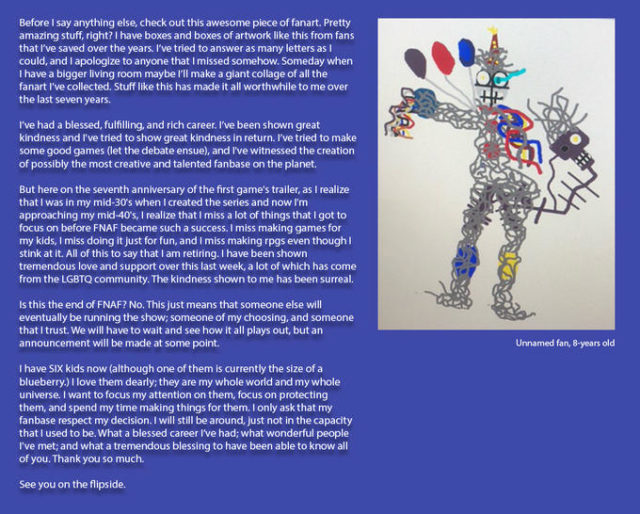 Despite the large number of anti-LGBT figures Scott has donated to, it is worth noting he has also (before the leak) donated $50,000 to the Trevor Project, a pro-LGBT charity. Granted, this was during a public charity livestream hosted by Dawko, a gaming YouTuber. I’ll leave whether or not this was sincerely motivated by geniune allyship up to you. Scott’s list of donations also included some Liberal Democrats, including one Tulsi Gabbard (his first to receive donations) on the grounds that ‘she would have been a good and fair president’. Not saying that this is a get out of metaphorical jail free card, but it at least goes to show there’s more nuance here than just “Scotty Scotterson donated the big money to bad people”.

Across the various donations, the only unifying factor (as posited in an interesting video by Game Theory) shared by all of the figures (besides capitalism, because let’s be honest, the version of Joe Biden touted about in Fox News is more of a leftist than the real thing) is strong stances on improving the military. Okay, so it’s not necessarily unlikely that Scott didn’t have bad intentions (depending where you stand on policies for the military), but at the same time, an argument from a dear friend and self-identified “dirtbag leftist” has pointed out that the whole “more trans/female drone pilots” philosophy can be seen as a sneaky choice of flipping people’s perspectives from what is done to who is doing it. For example: On the one hand, male privilege? White privilege? Without getting too bogged down by details, those are 100% real things that do indeed, exist. On the other hand, letting more marginalized people into positions of power only solves half the problem (the other half being, how do we build a better society that reduces the need for military conflicts and other societal issues like poverty). Scott’s (supposed) preferred focus on the military could also be seen to implying LGBT civil rights are a less important/secondary issue, which is an equally valid reading of the situation.

I must now love and leave you, as I wasn’t able to work on this at a time I wanted due to some Tom-foolery with my laptop flipping out, but while you’re still stunned into contemplating your ethical stance on the situation- SPONSORSHIIIIIIP- and the sponsor is me. Because I know my self-worth, and you should too… But seriously, we have good stuff at the store too, plenty of horror games and more to scratch that FNAF-shaped itch.