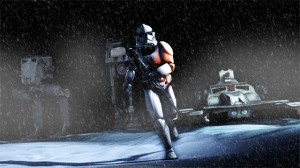 Battlefront is, at present, in development at DICE (Battlefield developer) in Sweden. EA plan to show more of the first-person shooter in Spring 2015, as we haven’t really seen much of the game so far apart from a few teasers.

EA had said previously that it was hoping to launch Battlefront close to Star Wars: Episode VII, which is set to release in cinemas later in 2015.

A double dose of Star Wars to look forward to next year then! Game and film being released so closely..