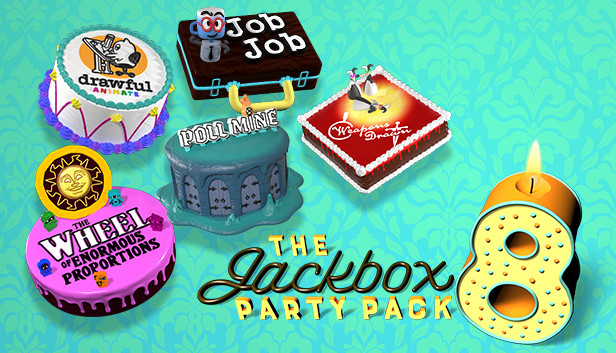 If you ever need to liven up a party or social event, just load up the ol’ Jackbox Party Pack and you are guaranteed to be in a great time of fun. It’s one of my favourite party games and with 7 packs to choose from, you are constantly spoiled for choice.

And now a new contender has entered the scene. The Jackbox Party Pack 8 is expected to hit digital shelves on October 14 and I cannot wait to try out these new games.

If you haven’t been introduced to The Jackbox Party Pack series before, don’t worry, you don’t need to start from the beginning. it’s a series of party video games developed by Jackbox Games, with each new pack has different party games to choose from such as Drawful, Trivia Murder Party, Fibbage, Blather Round and so much more.

Some party packs throw in some brand new games that players have never encountered before, and some add sequels or revamped versions of beloved classics. The Jackbox Party Pack 8 has a little bit of both for us in store.

Drawful Animate: Yes, the best drawing game is back with a new and exciting twist! Players must create two-frame animations while others try to guess what they are (3-10 players).

Job Job: Players must create answers to job questions based on words provided by other players, the perfect practice for those challenging job interviews. (3-10 players).

Weapons Drawn: One that has caught my eye for sure… a social deduction game where everyone is the murderer and detective, players must draw the clues while trying to solve murders and hide their own (4-8 players).

The Poll Mine: A team-based game where players must answer opinion-based questions with the answers ranked individually by your team, in an effort to escape a mine. Definitely set to ruffle a few feathers… (2-10 players).

The Wheel of Enormous Proportions: Players spin a mystical wheel and answer trivia questions, but chance plays a big part in whether you’ll, which will also ruffle a few feathers from the sore losers (me) (4-8 players).

Pre-order FIFA 22 from our store!