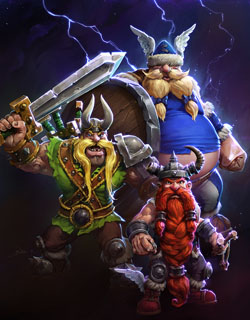 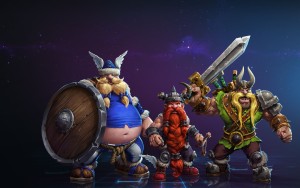 The Lost Vikings: Heroes of the Storm

Erik, Baleog and Olaf are back in Blizzard’s return of The Lost Vikings!

Blizzard have revealed the return of The Lost Vikings, who shall be making their debut in ‘Heroes of the Storm’. Unlike your usual heroes, these guys start off without any basic abilities at all and have three units which players control. A challenge, you say?

Each Viking can move, attack, and be killed individually. Re-spawn timers are also unique to each of the Vikings. These lovely lads are required to be near each other when the player wants to use their ultimate ability, Longboat Raid. Grouping the Viking’s together also allows them to break the chests on the Blackheart’s Bay map very quickly. A bit of good old fashioned teamwork is what we like to see! Mainly due to the fact that they’re Vikings…

Each one of these glorious men has unique traits. Erik the Swift moves the fastest of the trio and possesses longer attack range. Olaf the Stout has the most health of the group, has faster regeneration, and can charge to slow enemies. Baleog the Fierce deals splash damage to enemy units behind those of his target. Blizzard also revealed alternative skins for the Vikings, including Master skins and Pyjama Party. I’ve always fancied a Viking in a pair of long johns!

Blizzcon last year is where Heroes of the Storm and the return of these three Vikings was announced. The game entered closed beta last month, in which players can gain immediate access to if they purchase the Founder’s Pack.

The Lost Vikings was first released all the way back in 1992 for the Super Nintendo Entertainment System as a puzzle action game. You can watch the Heroes of the Storm trailer HERE, on our ‘Exciting Game Trailers’ playlist on YouTube.