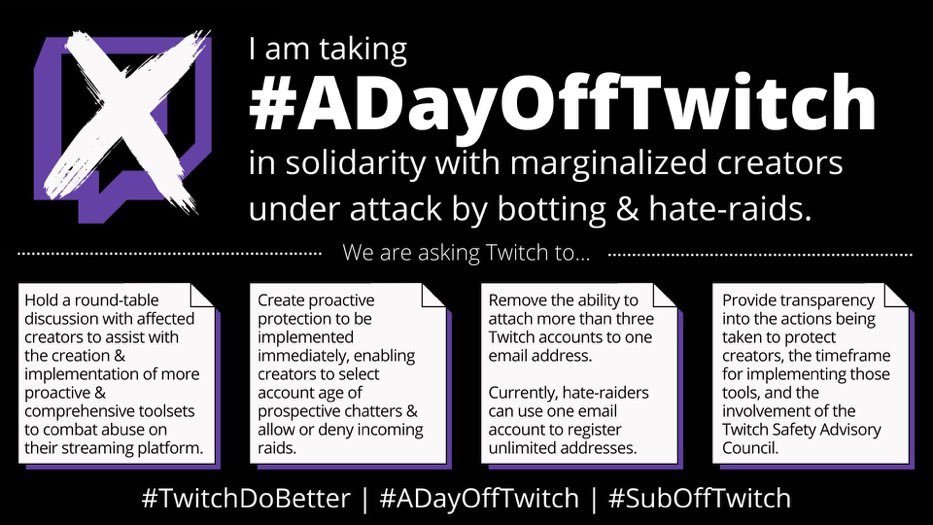 Last week, streamers and viewers carried out a protest on Twitch with the hashtag #DayOffTwitch on Twitter, by taking a day off in response to the company’s inactions in regards to the hate raids that have been happening more and more regularly on the streaming site.

The analytics team at Gamesight looked into the statistics regarding the number of viewers that day and have reported the site received its lowest total of daily hours for the year.

Twitch managed to lose around 1 million viewers last Wednesday due to the protest that was carried out by a number of Twitch streamers including ShineyPen, RekitRaven, and Lucia Everblack.

Gamesight compared the data to averages as well as daily Wednesday engagement from the last 2 months and said the overall viewer hours on September 1 was a “notable anomaly”.

The last time daily viewer hours on Twitch were this low was back over in Christmas during December 2020; this is the lowest viewer hours have been for all of 2021.” – Adam Lieb, CEO of Gamesight

Some streamers couldn’t engage with the protest due to contractual obligations with Twitch or deals with other sponsors, so the drop could have been higher. Yet there are other reasons for the drop as some streamers have left Twitch to join YouTube Gaming, such as DrLupo and TimtheTatman, which has caused their viewers to move with them. Other possible reasons are because school has started again in some parts of the world so that would have impacted on certain viewer statistics too.

Twitch has now responded with an email to its creators saying it has acknowledged the message from the protests about hate raids, and the company are working towards rectifying it.

Now we have to wait and see if Twitch carries out its promise and whether it is successful, or it causes more backlash.