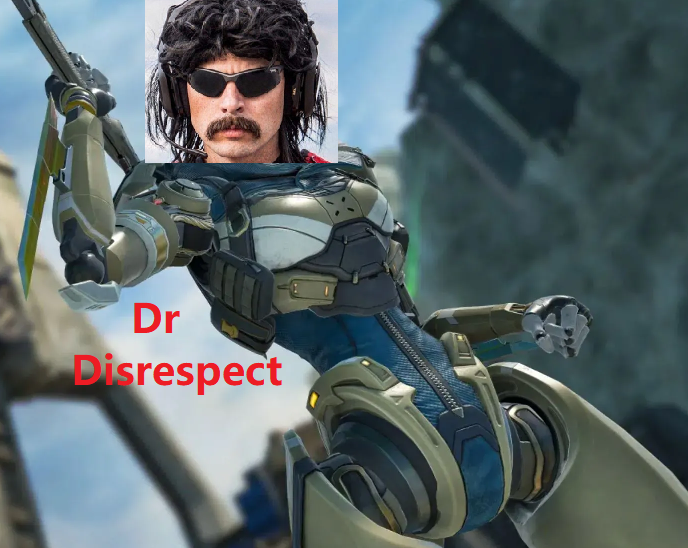 Dr Disrespect is a popular American YouTuber and streamer who recently claimed part of why he doesn’t stream the FPS battle royale Apex Legends is due to a lack of fellow YouTubers to play it with as regularly.

I feel something of mildly-related kinship with Doctor D in that his journey from disliking to enjoying Apex. In August 2021, he came down hard on the game for being “Boring” and at the time not as good as Call of Duty Warzone, though he would go on to call it “a breath of fresh air” in the Battle Royale scene, despite not streaming it much after that. Now he’s stopped streaming because of no one to play with and here we are!

Lad has also gone on record saying why Apex isn’t always the most casual-friendly game out there and I agree! I mean, say what you will about Fortnite, but at least it’s easier to buff your health and shield to the max most of the time. None of that malarkey with having to find X Ultra Super Epic Armour Type to get Y number of shield bars before a random bloke creeps up from behind like Uncle Wallace at family gatherings”!

The Side Tangent Power Hour: Lad’s ‘stache game is 1000% on point! It’s like Freddy Mercury’s disembodied facial trimmings made out with the nearest pair of sunglasses that a wizard made a real boy! If Ron Burgundy, Ron Swanson and Teddy Roosevelt were sitting in a bar, Dr Disrespect’s mustache would enter the room 5 minutes before he does! I’d pay good money to see a Death Battle sequel to Segata Sanshiro vs Chuck Norris, only for some hitherto unseen hair-made Lovecraftian leviathan to wreck both of them, then you zoom out to reveal it’s Dr Disrespect sipping on a pornstar martini with Bayonetta only for him to say-