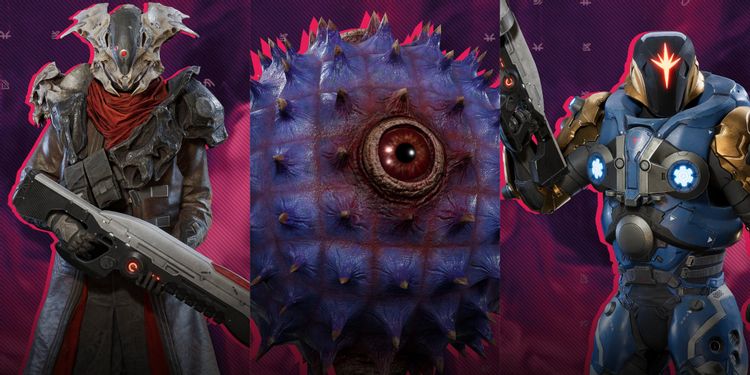 With only a few weeks to go until players take control of Star-Lord on an all-new adventure, Eidos Montreal have decided to treat fans with sneak-previews of some of the Guardians enemies.

The upcoming Guardians of the Galaxy video game will see you take on a wide variety of cosmic threats. Visiting the bizarre worlds of the Guardians universe will have the team come up against some the whackiest enemies Marvel have to offer.

If your unfamiliar with the exploits of Peter Quill and his crew, check out the trailer below for an idea of what you’d be getting yourself into:

As you’d expect from a team of space mercenaries (one of which a talking raccoon), the bad guys they’re taking on aren’t going to look like your generic video game henchman.

Quite the contrary, actually.

Eidos Montreal sparingly shared new character posters with the twitter-verse throughout last week. Toothy alien lifeforms, one-eyed beasts and heavily armed troops ensure we’re going to have quite the fight on our hands come Oct 26 . We even get a preview of the Universal Church of Truth cultists under Grand Unifer Raker (quite the mouthful I know).  Judging from the trailer, they look to be the main antagonists to our team of misfits.

Take a look at all these wild character designs below:

We're kicking off #CosmicEnemies Week! Check back every day for a look at some of the baddies you'll face in #GOTGgame

Starting today with a selection of weird and dangerous creatures 😮 pic.twitter.com/mRWpnEwLMj

As you can see, the enemies encapsulate the colourful and eccentric features you’d expect to see in the Guardians universe.  We reckon the art team must’ve had such a fun time creating these bad guys and they deserve all the praise they’re getting at the moment.

Our personal favourite has to be the monstrous Moniscuble, who looks like he’s gonna take quite a few bites out of us with those daringly long teeth.

Not every extra-terrestrial life you meet out there is going to want to rip our team to shreds, with the telepathic space dog Cosmos looking to help the Guardians in this latest clip:

To be fair, who wouldn’t want to ask for help from Cosmos and his pups? Less terrifying and more cuddly than the other lot, that’s for sure.

Eidos Montreal have also confirmed that the game will feature large-scale boss fights. If those are just the standard enemies, we’re truly scared of what villains we’re going to be going up against in these.

The Guardians Of The Galaxy game is set to be released on Oct 26 and will be available on Microsoft Windows, Nintendo Switch, PS4, PS5, Xbox One and Xbox Series X/S. Check out why PC players will be getting the best out of Star-Lords adventure here!

nextXbox: Adidas Unveils Next Pair of Trainers in its Xbox Collaboration