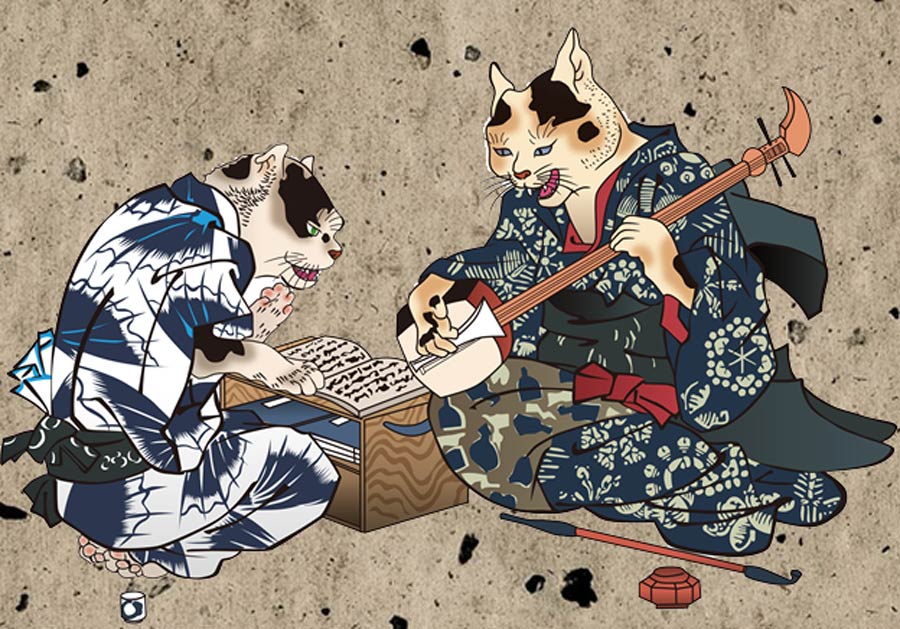 There are a number of recent and upcoming games that use various cultures and mythologies to drive their stories. This series aims to explore the relationship between a game and its surrounding mythology and how this shapes its characters. Today, we look at the game Ghostwire Tokyo and its use of Japanese folklore and mythology.

Ghostwire Tokyo was released 25th March 2022. In the game, Tokyo’s civilians have all disappeared and Yokai, spirits or demons, have invaded the city. You play as Akito, a civilian who survives after being possessed by a demon, KK. Akito and KK must work together, clearing the city of demons and returning Tokyo to the living.

When Ghostwire Tokyo was announced in 2019, one of the major concerns people had was whether or not you could pet the stray dogs. The following year, Tango Gameworks and Bethesda announced that yes, you could pet the dogs. Just before the game’s release, it received more attention for its inclusion of “Yokai Cats Running a Bodega“. Clearly then, the developers knew what the internet wanted. So great is the internet’s love of pets, however, that fans were let down when it was revealed you couldn’t feed the cats, stray or otherwise. Since then the game has received mixed reviews, with people commending its detailed environment design but limited gameplay choices. Coincidence, I think not. Regardless, the publicity surrounding the cats highlights how society today views them as solely pets and is desperate to give them love and attention. However, this wasn’t always the case.

The Yokai Cats seen in Ghostwire are known as Nekomata. In Japanese folklore, these spirits are cats that have lived for so long that they have acquired both spiritual powers and a second tail. But in the game…they run bodegas. In fact, Nekomata were originally seen in Chinese folklore and were said to be cats that lived in the mountains, with a taste for human flesh. These stories were one of a number of things that were adopted from Chinese culture into Japan. These cats were seen as wild, monstrous beasts that would kill and eat helpless civilians. But in the game…they run bodegas. Gradually, during the Edo period – as cities became more populated – the Nekomata were also said to come from domestic cats that reached old age. Nevertheless, the Nekomata still retained their malevolent tendencies, with the ability to raise and control the dead, cause fires and kill people. But in the ga- you get the idea.

Ghostwire Tokyo‘s Relationship with the Past and Present

Ghostwire Tokyo blends both past and present throughout its game. In this Wired article, the game’s creators remarked upon the juxtaposition between the “old shrines” of Tokyo and its modern skyscrapers and how “the past and modern technology intertwine to give the city its identity”. This idea has been prevalent in the discussion of Japan’s identity as a whole – with some bemoaning Japan’s technical extraordinary progression while seemingly abandoning its Shinto past. One of Japan’s most famous exports, Godzilla, is seen as this battle between nature and technology.

But beyond Ghostwire‘s environment design, the game brings this relationship of past and present into its character design as well. The city is peppered with Yurei, ghosts, who were once overworked civilians and now haunt the city, dressed in their business-suits and carrying umbrellas. Ghosts of teenagers and schoolchildren, once addled by anxiety and the stresses of the future, now haunt the streets headless. Their school uniforms being used to identify them instead. The developers at Tango Gameworks have updated the Yurei folklore of the past to reflect the present. Although the city is seemingly abandoned by the living, the Yurei are dressed as civilians who you would expect to see walking down the street – with the same problems that any civilian today faces. Through this, the developers are further intertwining the living and the dead, the past and the present.

But what does this have to do with cats? Well, the developers do the same thing with the Nekomata. The character design serves to reflect today’s culture. In Japanese culture, cats have gone from being monstrous beasts, from being necromancers and evil spirits to bearers of good luck, to Hello Kitty and now to cute Bodega owners. As Hiroko Yoda – an author on Yokai and consultant on Ghostwire – says “They shape-shift to suit the times. They can be cute. They can be scary. They can be helpful. They can be whatever you need for the purpose.”

The Yokai and Yurei of Ghostwire Tokyo are updated to reflect modern society. They examine the problems of technology, anxiety, stress and everything that encompasses modern day life. And through this reflection they allow players to look at themselves and ask themselves where are they going?

Ghostwire Tokyo is available at Go2Games – on PlayStation and Steam.