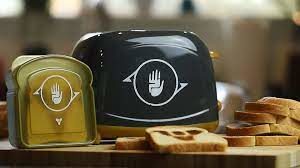 Let’s get that bread…

Everybody loves a gaming-themed home appliance. A personal favourite of mine was the “Jugger-Nog Mini Fridge” which released alongside Black Ops 3. For Destiny fans a new must-have home appliance has become available for pre-order in the form of a Destiny-themed Toaster.

Last year, Bungie announced that if the Destiny community was able to raise around $800,000 USD for the St. Jude Children’s Research Hospital then they would release an official Destiny-themed toaster. Well, the community did in fact hit this target and now this exciting bit of gear is set to hit the streets.

The Toaster is made in reference to the frequently used term “let’s get this bread” by Destiny players during loot runs and the Jötunn rifle itself being nicknamed a toaster.

Get that bread, Guardian.
The Destiny Toaster is now available for pre-order on the Bungie Store.

The Destiny-themed toaster excitingly burns a Tricorn emblem into your bread, which means making toast has never been done with so much style. For any hardcore Destiny fans out there this is a must buy.

The toaster itself is retailing at $85 direct from the Bungie Store and it comes with a free container for all your Destiny-themed sandwiches. Additionally, you’ll also receive a free Destiny 2 in-game Burnt Edges emblem.

Shipping of the product is expected to commence between December and January. It’s almost time to get that bread.