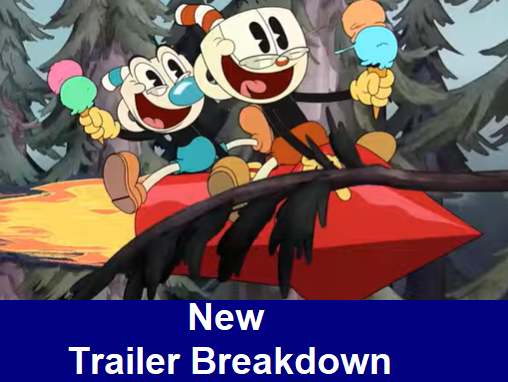 Netflix dropped a new Cuphead trailer folks, and it’s gonna be a doozey! So gather ’round, step right up and hold onto your jolly-wollies, cuz we’re gonna breakdown on this trailer like an 80s b-boy! Click here if ya wanna mosey on over to the trailer for yourself, but don’t forget to pop back for some real swell commentary!

For starters, the show’s visual style really is dripping with that 1930s classic-Disney meets Rob Fleischer swag! Clear and readable, but the designs and subtle grainy flickers at times are faithful to the game’s aesthetic… Which is awesome, but hey, Cuphead the character’s design was based off an old-timey anime bloke, so imagining Cuphead and Mug Man as JoJo’s-esque stand users with heavily-shaded eyes in serious moments and “5-minute”-long beam struggles would be hi-larious as a bit.

Speaking of anime, power/magic systems are a common staple of the medium, yes indeedy Mr McCreedy! That bit at the beginning where our Titular Headed Cup flicked his paint brush only for the paint to projecterooney itself in a way just like the player’s weapon powers in the Cuphead game was sure neat!

The Cuphead Show will be coming to Netflix in the month of love, chocolate, Deadpool AND Dying Light 2! Which is to say, it will release on February 18th.

Seemingly taking more of an ensemble farcical comedy route than the level-by-level shooty-finger-bang action of the game looks like a great fit for the story, since that way you can flesh out the world a little more, get more mileage from the cast of characters, and all that good HashtagWritingAdviceTwitter tom-foolery. And I like a good high-class bout as much as the next guy, but let’s not mince words, will be nice to see a little more variety in shows going forward, which this show seems to be doing!

Speaking of utilizing your cast of characters, Ms Chalice has shown up multiple times in the trailer. Between this and the fact she’ll be getting a whole DLC pack in large part centered around her for the Cuphead game (psst, more on my breakdown for that DLC here), I’m looking forward to seeing what the writers do with her.

Overall, in case it wasn’t clear enough, I’m extremely optimistic for this show! May even write up a review blog or YouTube review video if I’m feeling adventurous and The Powers That Be (AKA My Schedule) can allow for it.