The “Tragic” Backstory: Activision Blizzard has recently landed in a whole lot of hot water due to Certain Allegations. Gosh-golly, this sure will put a dent in the development for future games.

The Actual Tragic Backstory: Only one of the known abusers at Activision went to the slammer as of yet and surprise surprise, Mr Kotick knew about internal reports of rape, racism and other sexist tomfoolery happening at the company all along! In addition to a past of sexual harassment reports directed at him (more recently, a poor-taste “joke” to a flight attendant of “I’d harass that”), Bobby Kotick was also discovered to be listed in a “Little Black Book”. A record of island visitors kept by… 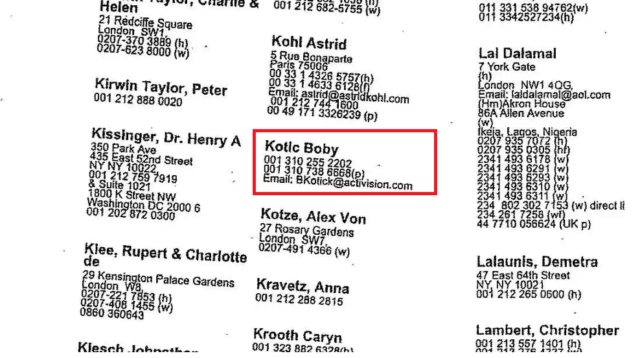 Given the one-two combination of Bobby Kotick’s immense wealth and the quotes listed below, it seems the most likely scenario for Bobby Kotick getting fired would be out of how it affects the profits of Activision Blizzard. In addition to the company’s “fratboy culture” leading to a regularly-harassed employee’s suicide, a California lawsuit also highlighted the company’s mistreatment of women as “outsiders”.

“I’m seeing people leaving the company, and high-level women, women that are in senior positions are just leaving the company because they have no faith in Kotick” – Jessica Gonzalez, senior test analyst at Activision Blizzard’s Battle.net.

“The longer he stays, the more likely we’ll see very high turnover, if not higher turnover than what we’ve seen the past couple of years. And that’s going to make game development very difficult […] Collective development talent is the most important asset by a wide margin to a game company. Erosion of this talent is the biggest key risk to any creative business. This risk is currently playing out and accelerating” – Andrew Uerkwitz Analyst at Jeffereis.

“You have people who are disengaged in the work. They don’t trust leaders. They’re more likely to look elsewhere. So you’re going to lose talent, and the talent that you retain is probably not going to be performing at its true potential.” Colleen Ammerman, director of the Gender Initiative at Harvard Business School.

Sony, Microsoft and Nintendo have also released public statements on the handling of Bobby Kotick and Activision Blizzard. We’ve also covered various aspects of those statements here and here. I’d be wary of Sony though, as they are also dealing with a sexual harassment lawsuit from a former CEO.

Before we hit the Product Poems, I’ll end this blog by saying although firing Bobby Kotick would be massively helpful, getting rid of one boss won’t stop similar occurrences happening in the future. Kicking up a storm online and going on protest marches is great, but what should be pushed for is making sure these things are addressed out of justice and stricter laws on this kind of conduct, not because of profit! Thanks for reading.

Sojourn. Big like Thor and Björnson. Good game. Time to flex my knuckles.