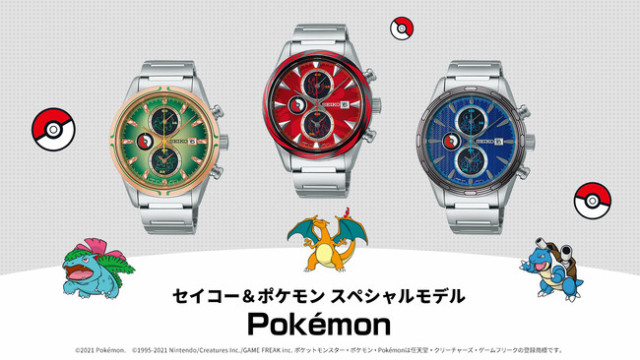 As stated previously in my other Japan-does-a-really-cool-thing-for-the-Pokemon-anniversary post, Japan keeps doing really cool things for the 25th anniversary of Pokemon.

Japan has always managed to release awesome merch for its big franchises and The Pokemon Company has been partnering with so many companies this year to celebrate their success over the years. This time it’s Japanese luxury watchmaker, Seiko.

Seiko is releasing a set of luxury watches based on the three starter Pokemon from Pokemon Red and Blue‘s Kanto region in Japan next month.

Each design is made of stainless steel, along with spotting a sapphire glass face.

The three pokemon, Bulbasaur, Squirtle, and Charmander, are by far some of the most popular starter Pokemon among new and old fans alike and each set of designs is catered to the respective Kanto region Pokemon and their attacks and evolutions.

This isn’t the first time Seiko has collaborated with Pokemon, as they released Pikachu, Eevee, and Mewtwo watches for the holidays last year.

The watches all come in Pokemon-themed watch boxes, and a little bonus microfibre cleaning cloths with the respective Pokemon stitched on. The watches themselves feature a solar-power battery, stopwatch, and alarm.

These are limited edition watches and with only 700 units being released for each watch, it comes at a price. 49,500 yen to be precise (£325). Pokemon fans can get them from Seiko’s online store but be quick as they will release August 6 and will definitely sell out.